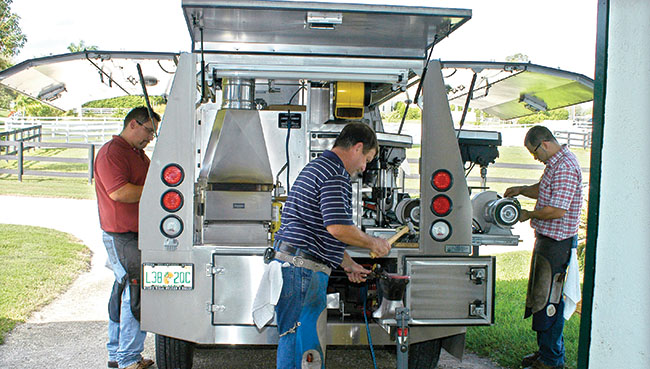 There’s not much standing around done when Gilchrist’s crew is in a barn. As Gilchrist shapes a shoe at the anvil, James Clark, right, is safing shoes at a belt grinder and James Kimball-Davis, left, is fitting Styrofoam pads to a shoe for a sole pour. The shoe season in the Wellington, Fla., area is fast-paced, placing a premium on efficiency and teamwork for farriers.

For Florida, it’s a relatively cool November morning — meaning it’s still shirt-sleeve weather as “Team Gilchrist” gathers at the home of farrier James Gilchrist to embark on a day of “Shoeing For A Living.

Gilchrist, a veteran for almost 30 years of shoeing, has been a fixture on the show circuit of the West Palm Beach and Wellington, Fla., area since the 1980s and moved here full time in 1999. His motivation, he says, was a little unusual.

“I started coming down here in the 1980s,” says Gilchrist, a Georgia native. “I wanted to work in the winter and boat in the summer.”

Gilchrist, an avid boater and tournament angler, gets plenty of opportunities to spend time on the water, but he says he also found that he enjoys the challenging and rewarding work on the Florida show circuit.

“These people are not paying me to just slap shoes on their horses,” he says. “They are paying me to set up their horses and make adjustments as the season goes on so that these horses can perform. These are Grand Prix horses. They are…