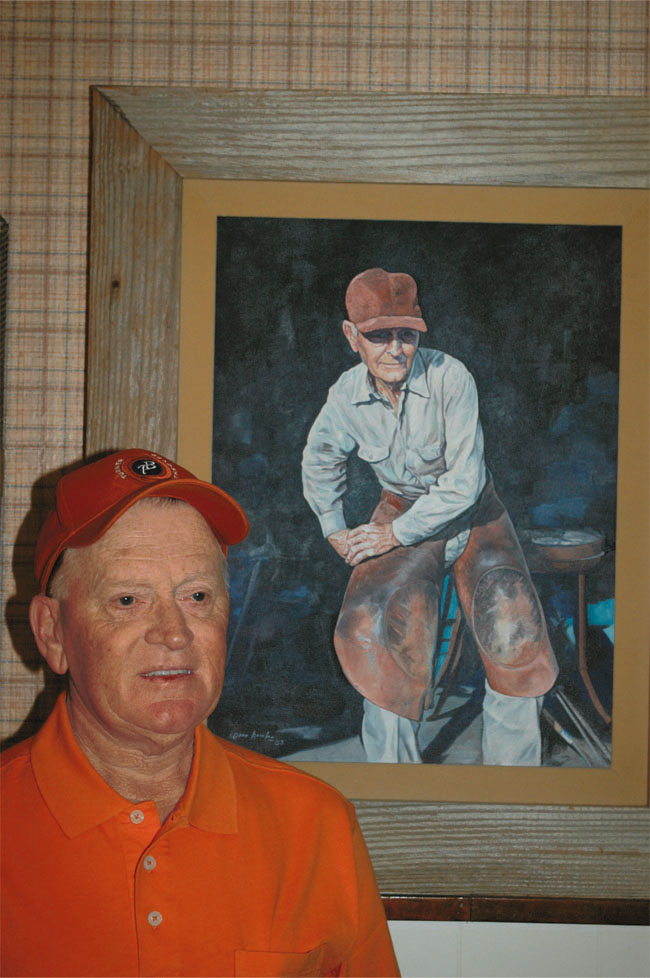 A Half-Century Of Letting The Horse Talk To Him

By Jeremy McGovern posted on July 1, 2009 | Posted in Education

Looking back over his career, Texas farrier Doyle Blagg sees the reward of setting a plan and sticking to it

Doyle Blagg credits his father Bill (in the painting above) as influencing his decision to put a plan into place for when he is finished shoeing.

Doyle Blagg is a farrier whose reputation precedes him — and in a good way. When I arrived in Dallas, Texas, 2 days before riding with Blagg, I found other hoof-care professionals ready to share kind words about their colleague. Burleson farrier Pat Burton credits a shoeing job he saw Blagg perform as a main reason he is a farrier today. James Cox of Texas Farrier Supply can’t think of one person that the amiable Texan dislikes.

The accolades showered upon Blagg didn’t come about by accident. They are products of his determination to be a top-notch shoer and one who maintains friendly relations with others in the industry. After 53 years in the business, the fourth-generation farrier has accomplished both. Blagg has shod horses in nearly every kind of equine discipline and has become an industry educator through worldwide clinics, as well as informal ones he hosts in his home shop.

And while this edition of Shoeing For A Living features the familiar style of looking at a farrier’s approach to the mechanics, it also reveals Blagg’s desire to share with others as much as he can from his half-century on the job.

8:20 a.m. Although I’m about 10 minutes early for our meeting, the 67-year-old shoer is waiting for me in the driveway of his Collinsville home. Today isn’t going to be…

It Came Down To A Half-Point

Staying Out of the Horse’s Way

Three Ways Not to Succeed in a Horse Capital