A Historical Look At Farrier Licensing 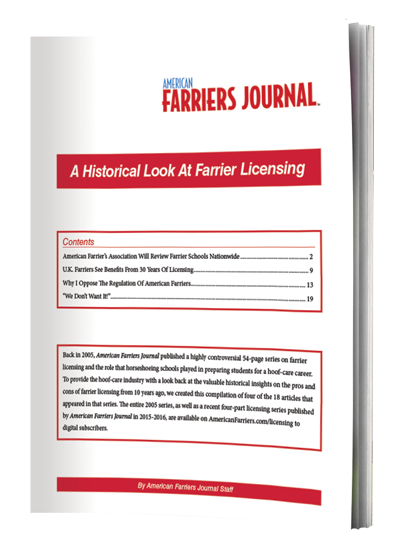 Back in 2005, American Farriers Journal published a highly controversial 54-page series on farrier licensing and the role that horseshoeing schools played in preparing students for a hoof-care career.

To provide the hoof-care industry with a look back at the valuable historical insights on the pros and cons of farrier licensing from 10 years ago, we created a compilation of four of the 18 articles that appeared in the 2005 series. The entire 18-article series, as well as the four-part licensing series published by American Farriers Journal in 2015-2016, are available on AmericanFarriers.com/licensing to digital subscribers.

Here is a quick summary of what can be learned reading four of the articles that were part of the 2005 series:

In 2005, the American Farrier’s Association issued a proposal that offered advice on minimum curriculum standards for farrier schools that the group felt could eventually lead to uniform testing for new farriers and the registration for all horseshoers.

As you might guess, the proposal received a mixed reception from the public and private farrier schools and from farriers working in the trade who were concerned about the pros and cons of licensing.

A number of shoers in Great Britain offered generally favorable comments in 2005 about their country’s regulation of farriers. While much has changed over the past 10 years with farrier regulation in Great Britain, this article offers valuable…

The Ultimate Guide to Running a Successful Farrier Practice