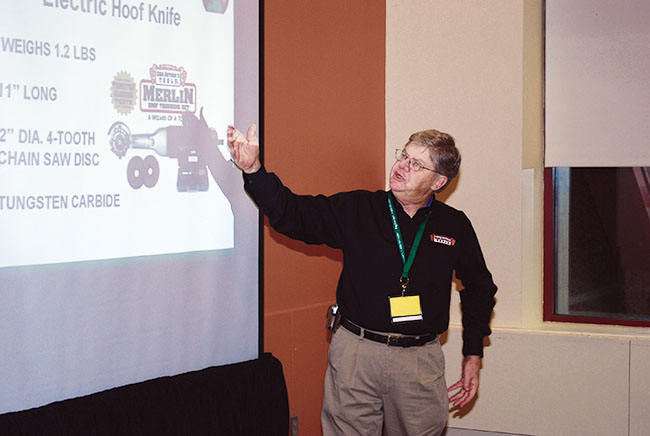 A Power Tool for Hoof Trimming

By Pat Tearney posted on April 1, 2010 | Posted in Equipment

During a product knowledge presentation at the International Hoof-Care Summit in Cincinnati, Ohio, in February, Allen DeWolf drew laughter when he showed a slide with three phrases on it that he readily admitted probably didn’t seem to go together to most farriers. The phrases were:

DeWolf, national sales manager for King Arthur Tools of Tallahassee, Fla., will also admit that they aren’t exactly standard equipment in farrier tool boxes just yet, but says he’s seeing a greater interest in the Merlin Electric Hoof Knife — the tool that combines those three phrases.

From Wood, To Cows, To Horses

DeWolf says the tool is an offshoot of an earlier electric tool that was developed for trimming bovine hooves.

King Arthur Tools had originally developed a line of smaller electric chain saws for the wood carving industry. He says the application of King Arthur products to animal care started when a dairy farmer contacted the company and wanted to buy a woodcarving chain saw to trim the hooves of his cows.

While not too sure about using the wood-carving model for the purpose, DeWolf says the company did think the technology could be applied to the task. Several prototypes were created and professional cow hoof trimmers from Florida to Wisconsin were asked to test them under…