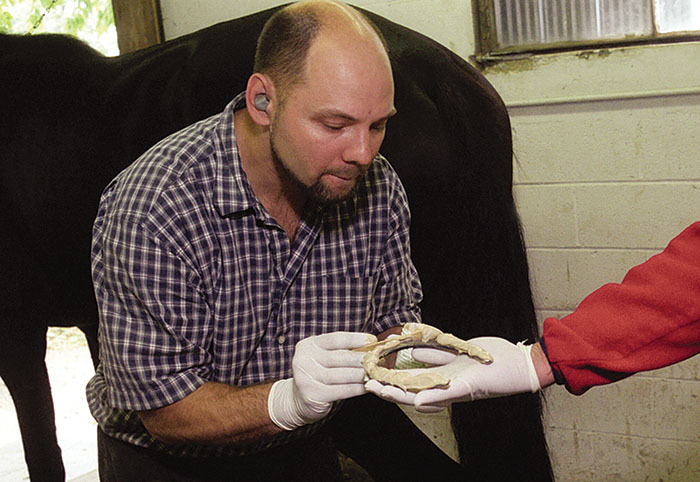 Shoeing for the 21st Century

MAKING IT STICK. Trainer Bob Stewart holds a shoe while Steve Stanley applies Equilox to it in preparation for gluing it on the trotter’s hoof.

I've been shoeing horses for more than 20 years at The Red Mile in Lexington, Ky., as well as at other tracks. When I started, the standard shoes for a trotter at that time were 5/8-inch half rounds, often with a big leather pad. A trotter with 4-inch toes wasn’t uncommon.

Heavy shoes, heavy pads and long toes are quite uncommon today in Standardbreds. As the breed evolves, those of us who shoe them must follow this evolution by altering our methods.

If a horse can stay on gait with lighter shoes and a lighter set-up, he’s going to go faster. It’s as simple as that.

Fortunately, we have many new options to offer trainers, as there are shoes being used now that weren’t even available 5 years ago. At the 2003 American Farrier’s Association convention, I picked up a catalog from an Italian company that showed a whole new line of aluminum shoes, many of them geared toward Standardbreds. It’s a whole new world.

It’s my job to know what shoeing…

Getting Started As A Farrier: Shoeing For The Long Haul

Shoeing for the Rodeo