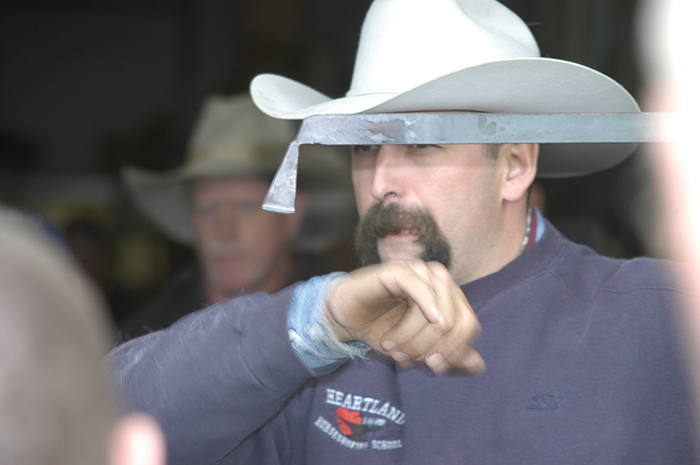 FROG SUPPORT. Chris Gregory checks over a heart bar style frog support he forged during a clinic at Centaur Forge in Burlington,Wis.

The president and the members of the recently formed American Farrier Education Council, Inc. have agreed to endorse the 2006 “Fun Student Farrier Contest,” which will be held on Oct. 26.

The contest is designed to encourage continuing education for student farriers.

AFEC is an independent organization  of private horseshoeing school owners whose goal is to provide superior education for students who wish to learn trimming and shoeing skills.

The council is inviting all private horseshoeing school owners to attend and also to take part in the contest. As an incentive, the Horseshoe’n Time televsion show will announce the event throughout the year and promote this opportunity for the public to meet all the private school owners at one time, along with vendors. To date, 11 schools have agreed to participate.

Each school can bring four or more students to participate and others to watch the contest. Participants must have  graduated during the 2006 calendar year.  There will be  two divisions: Those graduating during January to May and those graduating from June to October.

Each school owner or instructor that represents a school will be a team captain with four members on his team. The team will consist of one student from his school and three students from other schools, so no one school will be considered a winner. This contest is designed to be fun and encouraging…