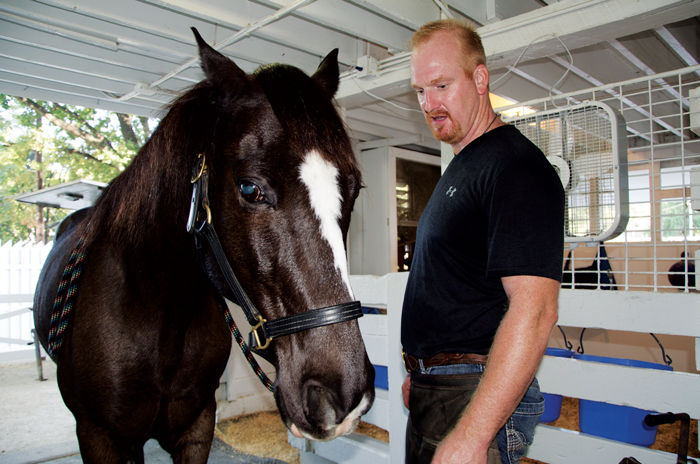 All The King's Horses

Tennessee farrier up to the challenge for Graceland’s toughest case

The jet black Tennessee Walker with a white blaze walks gingerly into the old white barn in obvious pain and discomfort.

After showing flat shod into his late teens, Candy has a number of maladies. The 25-year-old is in a good place, though. Candy receives outstanding therapeutic care that’s provided by an owner willing to go to any lengths to make him comfortable and pain free. Elvis Presley Enterprises won’t settle for anything less when it comes to Candy and his three stable mates — Tucker, Max and Bandit.

“Our black horse has been a shoeing challenge,” explains Alene Alexander, the stables supervisor at Graceland. “He’s got all kinds of tendon problems, he’s laminitic, he’s Cushinoid; you name it, he’s got it.”

“He has significant deterioration of the tip of P3,” explains Moscow, Tenn., farrier Daniel Bishop, who’s been Graceland’s farrier for 7 years. “We have had impressions of the coffin bone on the bottom of the sole, but he’s never punched through. He has lots of arthritis in his coffin and fetlock joints. And he has suspensory issues in his right hind, which are shod with Kerckhaert SX7s.”

When he shoes Candy, Bishop is cautious about causing more problems. Rather than pinning the clinches, he does them partially and rasps them off.