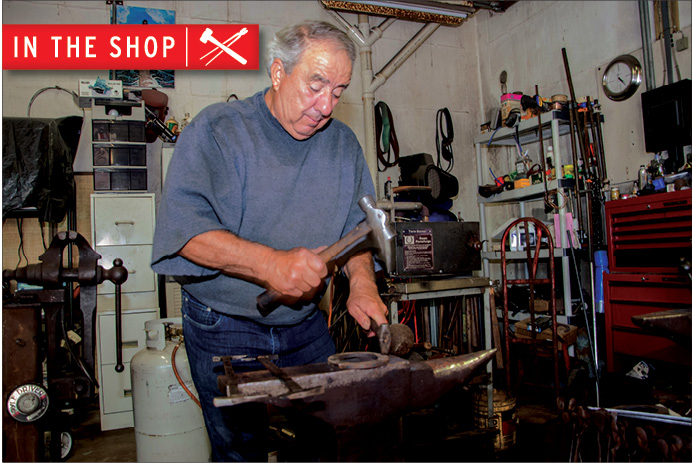 Nothing Goes To Waste In This Farrier’s Shop

By Jeremy McGovern posted on November 30, 2015 | Posted in Forging

For this instructor, the most important lesson in his shop is to think outside the box when at the forge

Growing up in a family that bred Quarter Horses, there was no doubt that Sonny Pistilli was going to make a career in the equine industry. It was through the need to tack on a shoe that he became a farrier. In 1965, his farrier couldn’t make it out to put a shoe back on a prized show horse. The judge disqualified the horse for only wearing three shoes. He began riding with his mentor, the legendary Seamus Brady, to learn the basics in case he found himself in a pinch again. After 5 months, he was hooked on the trade.

“It’s 50 years later and I still learn something about the horse every day,” says Pistilli.

The Bethlehem, Pa., farrier is still getting under horses a half-century later, although not as many. He works alongside his son Danny, whom he hopes to pass his practice to in the coming years. These days, whether it is with Danny or others, the elder Pistilli spends more time teaching than shoeing.

He opened Far Hills Forge in 1980 as a shoeing school for new farriers. The school has changed over the years and Pistilli now only takes on current farriers who want advanced lessons in hoof care and forge work.

Unless the instruction is at the barn, Pistilli holds his one-on-one or group instruction in his home shop. As he opened the door and turned on the lights to show off his shop, the teacher couldn’t help himself. He fired up the…

Premium content is for our Digital-only and Premium subscribers. A Print-only subscription doesn't qualify. Please purchase/upgrade a subscription with the Digital product to get access to all American Farriers Journal content and archives online.
KEYWORDS Clips drawing forge In The Shop pulling rounding hammer shop

Use This Mail-In Learning Opportunity to Expand Your Forging Skills

Anything Goes In Mail-In Forging Exercise

In the Farrier Shop: Steve Stanley and the Red Mile