A Legend Lives On

When Bob Nappi got the call in November 1999 that his friend Burney Chapman had passed away, he was heartbroken.

“He was the most ultimate mentor that ever lived,” says the San Diego, Calif., farrier. “He had a huge influence on my life.”

Besides following in Burney’s footsteps as a farrier, Nappi, through some twists of fate, is now tied to a gorgeous, jet black stud colt that bears his mentor’s name.

Chapman was a friend to many and to his farrier colleagues he was a living legend. He devoted his life to solving shoeing problems and educating farriers, trainers and horse owners to the benefits of effective shoeing.

Chapman was always available to help others learn more about shoeing and the treatment of laminitic horses. He inspired thousands of shoers to take pride in their work and profession and to continually strive for the benefit of horses. 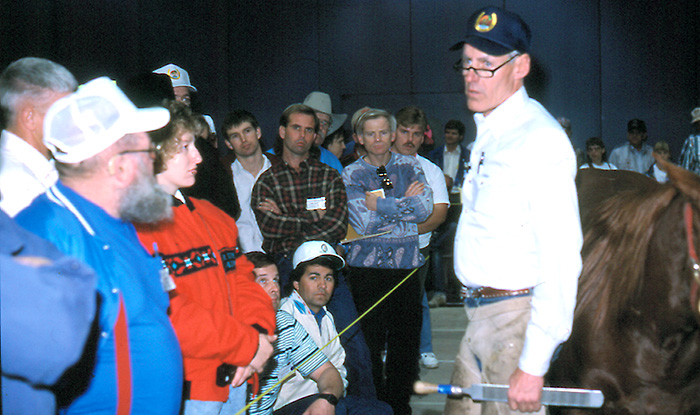 Always Helping Others. Burney Chapman devoted his life to educating farriers, trainers and horse owners about the benefits of effective shoeing.

He helped many a lame horse with the rediscovered heart bar shoe and pioneered many other ideas in the farriery business. During the 1990s, Chapman spent thousands of hours researching the causes and treatment of white line disease.

To honor his friend before his untimely death after a nearly 2-year battle with brain cancer, Nappi decided to mention an idea he had to Bill Thompson, a Quarter Horse breeder in San Diego, Calif. “Wouldn’t it…

Premium content is for our Digital-only and Premium subscribers. A Print-only subscription doesn't qualify. Please purchase/upgrade a subscription with the Digital product to get access to all American Farriers Journal content and archives online.
KEYWORDS Bob Nappi Burney Chapman honors profile

Can the particular region where a horse lives have an impact on potential Cushing’s disease dangers?

Think About Where the Horse Lives When Choosing a Therapeutic Shoe

Looking Back with a Southwest Shoeing Legend