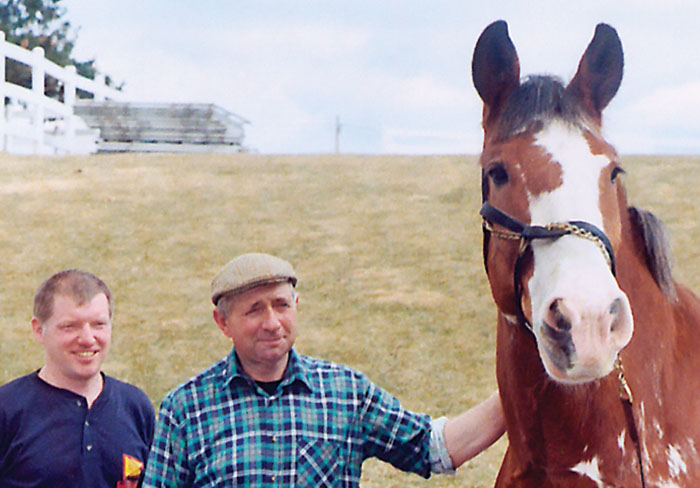 By Pat Tearney posted on September 1, 2004 | Posted in Education

REUNITED. Mike Wildenstein, left, and Roger Clark, were both on a panel of draft horse experts during a seminar at Tufts Universtiy in March. The previous year, Clark was among the examiners who tested Widenstein when the Cornell University resident farrier sat for the grueling exam to become a fellow of the Worshipful Company of Farriers of Great Britain.

Planning to be anywhere near Pocatello, Idaho, in the next few months? Then make plans to visit the Idaho Museum of Natural History for a new exhibit, “For Want Of A Horseshoe,” which opened July 29. The exhibit is a celebration of the horseshoe.

The exhibit covers the rise of the need for the horseshoe and the birth of the farrier craft. Just how involved that craft is made an impression on the creator of the exhibit.

“Learning the complexity of the farrier’s craft has been extremely fascinating,” says Christian Peterson. “They’re really part blacksmith, part veterinarian and part engineer, but they also need to have a working knowledge of farming, ranching and equestrian sports.”

The exhibit also delves into the symbolic side of the horseshoe, examining its place in art, literature and culture. Highlights include the art of Mel Jackson, a local folk artist who passed away last winter. His whimsical sculptures, created using old horseshoes and other cast-off metal materials, show off the horseshoe’s versatility in the hands of a skilled artisan. The horseshoe as a symbol of luck is also examined.

Even the sport of horseshoes is featured…