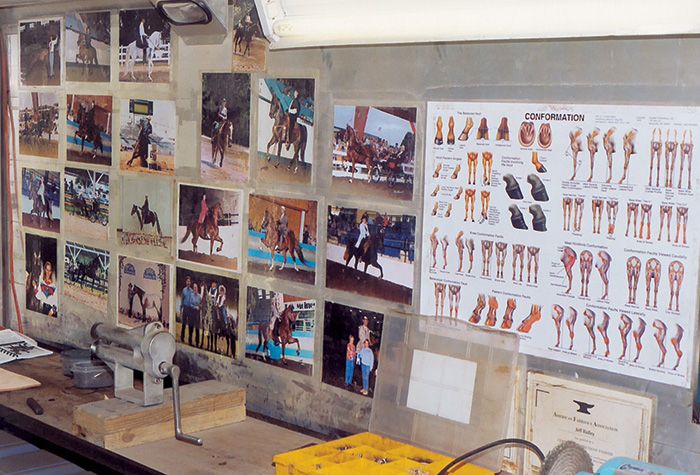 A Tale of Two Rigs

By Pat Tearney posted on September 1, 2004 | Posted in Equipment

MEMENTOES AND CHARTS. One wall of Jeff Ridleyʼs shoeing rig is covered with anatomical charts as well as photos of some of the horses he shoes performing in show rings.

The two shoeing rigs carefully pulled up to the doors of the Iowa barn are a contrast in styles. One is a spartan, utilitarian trailer, carrying a minimum of shoeing tools. It’s dwarfed by the gooseneck trailer next to it, which is laden with power tools, filled shoe racks, multiple work stations and even a photo bulletin board.

Yet each gets the job done for the farrier who uses it.

Focus On The Basics

The smaller rig belongs to Kyle Ballard. The two-wheeled white trailer isn’t huge, so Ballard maneuvers it easily and it takes him just seconds to set up for shoeing after he’s parked. He opens the back, pulls out his anvil and sets it up on its stand and swings out his mounted propane forge. Shoe racks, nails and shoeing supplies are stored in side bins where they’re easily accessible. His tools are lined up across the edge of the trailer bed, within easy arm’s reach of  his anvil.

Ballard makes relatively little use of power tools at this point in his career. He’s working at developing his shoe-making skills and wants to keep his costs down. A simple shoeing rig helps him do that, while also aiding his shoeing efficiency and presenting a professional image. 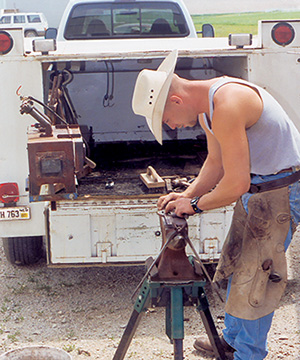 Shoeing Rigs Part of Irish Wake Tribute to a Farrier

Three Rigs, One System, No Missteps