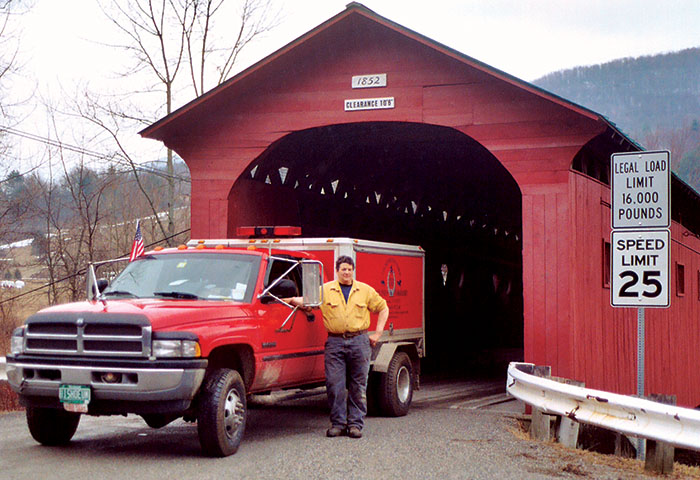 Shoeing In The Green Mountains

By Pat Tearney posted on July 1, 2004 | Posted in Equipment, Shoeing

PICTURESQUE SETTING. Farrier Ken Norman drives over a lot of Vermont’s famed covered bridges as he shoes horses in and around the state’s Green Mountains.

It's late March in Vermont. The temperatures are slowly rising, melting more and more of the snow and ice that has held the valleys, peaks and ridge lines in its grip during the winter months. And as winter loosens its grasp, the Green Mountain State enters early spring — Mud Season.

“It’s sure not the prettiest season — or the nicest season for shoeing,” says Ken Norman, as he slowly maneuvers his shoeing rig down the dirt-track driveway from Thornwood Farms, his home near West Pawlet to begin his day of Shoeing For A Living. “But it does mean that spring is on the way.”

Thornwood Farm, the horse farm and boarding stable that Norman and his wife Eli-Anita operate, is hard-up against the Vermont border with New York. In fact, when Norman gives visitors coming from further south in Vermont directions to his house, he routes them around a ridge line and into New York, then back across the Vermont border — particularly at this time of year when the more direct route can only be taken with trepidation and a 4-wheel drive vehicle.

9:02 a.m. Today, Norman’s shoeing route will straddle the border between the two states. He describes his shoeing “territory” as about 80 miles wide and 130 miles long. He shoes as far north as Burlington, Vt., and as far south…