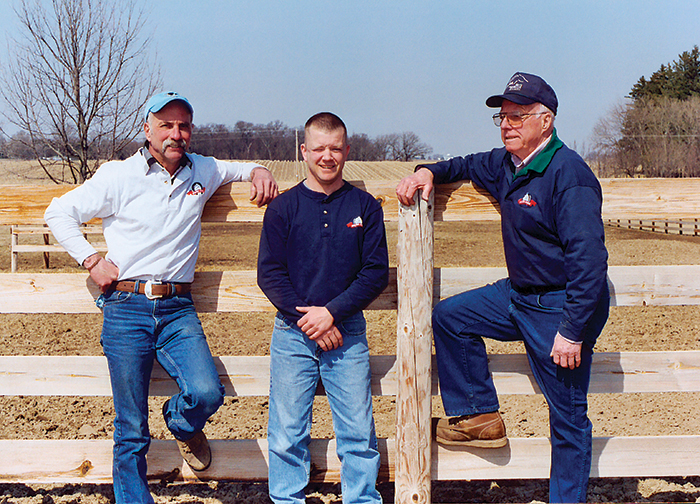 The Farrier's Life Is in Their Blood

By Ron Perszewski posted on November 1, 2004 | Posted in Shoeing

Three generations of the Carpenter family enjoy the independence of shoeing for a living.

CARPENTERS TURNED FARRIERS. The Carpenters (left to right), Bud, Jeremy and Glen, have found their calling as horseshoers and have worked from Illinois and Wisconsin to New Hampshire and Kentucky.

IN THE LATE 1930s, Glen Carpenter, a teenager who had left his Illinois home for a job as a stableboy in Kentucky, sat atop a horse named Whirlaway. He knew the horse was special, but he couldn’t know that he was breaking in a Thoroughbred who would become the first horse to earn more than half a million dollars, win horse racing’s Triple Crown and set a record time in the Kentucky Derby that would stand for decades. Nor could he know that his own blood line would continue to run through the horse world even longer.

Early on a sunny but cold morning in 2004, Carpenter, now 82, meets his son, also named Glen but known as Bud, and Bud’s son Jeremy, at Turtle Rock horse farm near Clinton in southern Wisconsin. It is a working family reunion, with the three of them, each a farrier and blacksmith, spending the better part of the day shoeing hunters and jumpers at this upper-end stable.

They work as a team. Glen drills and taps holes for studs in the shoes, while Bud and Jeremy trim hooves, fit shoes and draw clips. Jeremy finishes with a lot of hot shoeing. And they all share stories as the shoes redden in the forge.

Glen remembers how it all started. He worked at a…

More Shoers Share Their Thoughts on Signposts in the Hoof