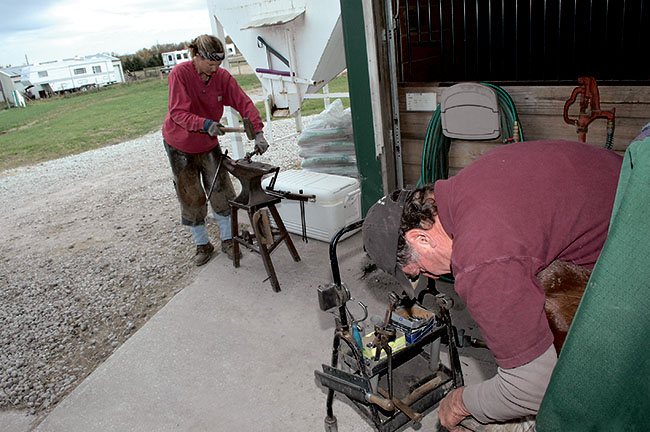 Shoeing Together in the Heartland

By Jeremy McGovern posted on March 1, 2010 | Posted in Business Practices

Bringing different experiences to the job, Jerry and Charity Mathews have developed a comprehensive shoeing practice in Kansas

The Mathewses’ practice relies on Jerry’s 32 years of shoeing and Charity’s ability to read performance horses.

When you read the first timestamp for this “Shoeing For A Living,” you may think that this day started slightly late. While it may be true that many farriers usually have a foot in the air by 9 a.m., this isn’t a case of the subject — or editor — sleeping in.

Jerry and Charity Mathews, besides operating a thriving farrier practice based out of Osawatomie, Kan., have six horses of their own, train driving horses and participate in competitions. Together for 4 years, the couple has been hard at work since this day began, feeding horses and cleaning stalls, among other barn duties.

Their daily shoeing practice is sandwiched between taking care of their horses and driving- horse pursuits. While both can be demanding enough that you may think they could choose between one or the other, the Mathewses love staying busy.

9:18 a.m. Jerry and Charity Mathews, driving a Dodge Ram 2500 SLT pulling a shoeing trailer, pick me up in Paola, Kan. We’re heading only a few miles away to the first stop of the day, but it is a bumpy ride on winding country roads, making the ride longer.

The first stop will tackle two barrel racers, but the Mathewses’ practice is much more diverse with an assortment of hunters, jumpers, dressage, English pleasure, among others. This is not a typical Monday, as they have only three barrel horses…

Work On Working Together