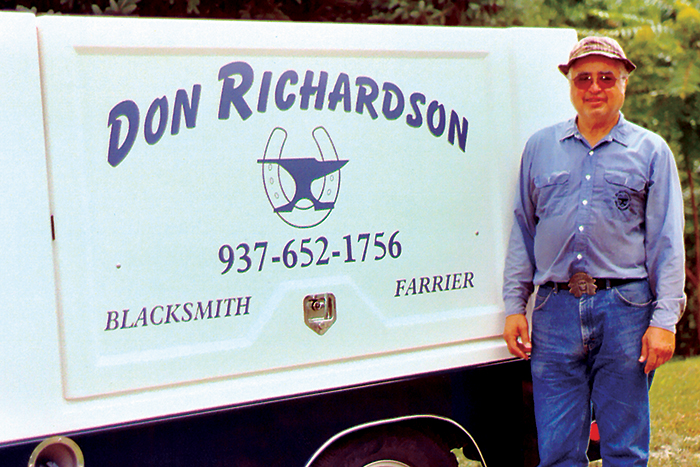 Ohio farrier carries on with lessons learned from Dad

SHOEING VETERAN. Don Richardson, a farrier from Urbana, Ohio, has been shoeing horses since 1957. He shoes out of this truck, which includes a Monetta shoeing body. Richardson is a big fan of the fiberglass body. He says itʼs easy to keep clean, durable and weighs less than many metal shoeing bodies.

The sun is shining brightly on what promises to be a hot July day as Don Richardson drives his shoeing rig through the Ohio countryside near Urbana, a small town located a short distance north of Dayton.

The fields are green with high-standing corn and soybeans. Summer is passing quickly, meaning it won’t be long until county fairs begin, bringing with them 4-H horse shows. It’ll be a busy time of year for the retired police officer — who actually started shoeing horses long before he ever donned a police uniform.

“There hasn’t been a year since 1957 that I haven’t at least worked on a few horses,” says Richardson. “Even during the 3 years I was in the service in the  ’60s, I’d be home on leave for a few days and someone would call and need a horse’s hooves trimmed or a shoe fixed.”

10 a.m. Richardson starts his shoeing day later than some farriers. It gets him to the barns after some of the morning chores are done and after the horses have been fed, but he admits it has as much to do with the time he spent as a police officer as anything…