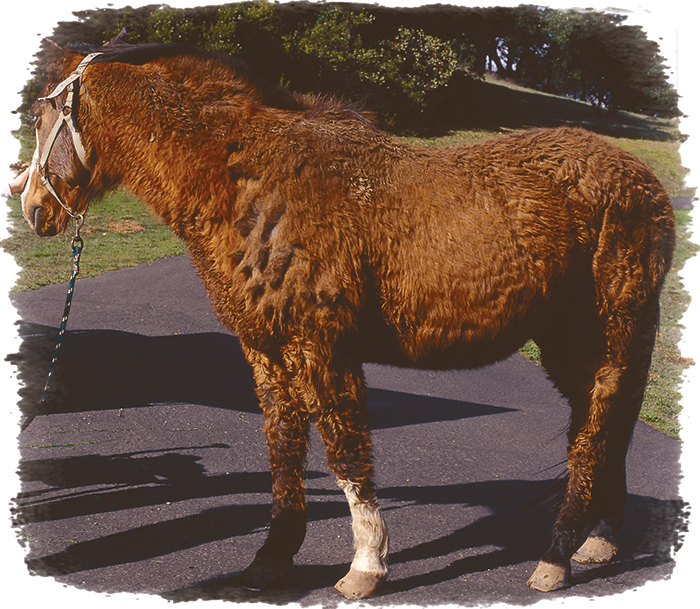 By Frank Lessiter posted on September 1, 2004 | Posted in Diseases

In horses suffering from both laminitis and Cushingʼs disease, abnormal distribution of fat is the most common clinical sign

Cushing's Signs. Too much weight, a cresty neck and balls of fat on the rump and neck are among the classic signs of Cushing’s disease.

When it comes to determining the most common cause of laminitis, a recently completed study at the University of Pennsylvania’s School of Veterinary Medicine places equine Cushing’s disease right at the top of the list.

Over a 6-year period at the school’s New Bolton Center, all horses in the primary care veterinary practice of Mark Donaldson that developed laminitis were tested for equine Cushing’s disease. This was done by evaluation of plasma adrenocorticotropin (ACTH) concentrations, which is one of many hormones that are secreted in excess by the dysfunctional pituitary gland. The assistant professor of medicine found 70 percent of the horses with laminitis also had Cushing’s disease as defined by high levels of the ACTH hormone.

Nearly 79 percent of the horses with Cushing’s disease also suffered from chronic laminitis compared to only 42 percent with normal ACTH levels.

The most common cause of laminitis among these horses was pituitary pars intermedia dysfunction, also known as equine Cushing’s disease. With this disease, Donaldson says the pituitary and adrenal glands produce abnormal amounts of hormones that play a vital role in the regulation of metabolism and inflammatory and immune responses.

While Cushing’s is typically considered to be more common in horses over 20 years of age, results from this study indicated that the disease is common in horses in their teens. While progress of the…

Researchers Study Cushing’s, Insulin, Laminitis and Survival Down Under

Know The Signs Of Cushing’s Disease