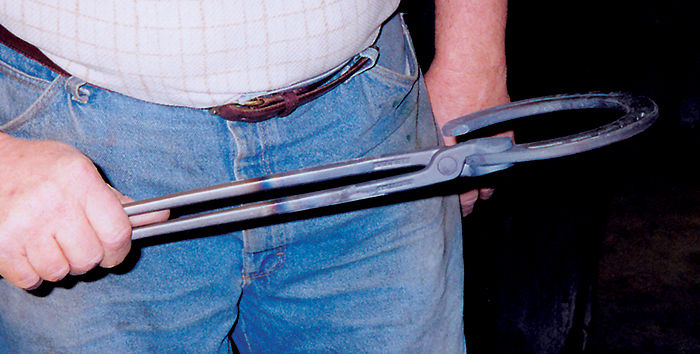 Taming Your Tongs Doesn't Have To Be A Tough Task

By Michael Austin posted on December 1, 2004 | Posted in Equipment

Parallel jaws are the key to a firm grip

GETTING A GRIP. Bob Schantz says that in order for tongs to give you the firm grip you need in forge work, the jaws should be parallel, gripping the shoe or the piece that you are working on throughout their length.

When Bob Schantz reaches for his tongs, he has certain expectations. First, the jaws of the tongs must be parallel as they grip the work piece. If there is too much room in the front or back of the jaws, then the tongs won’t get the job done correctly. Second, the tongs need to fit comfortably in his hand.

Schantz, the owner of the Spanish Lake Blacksmithing Shop in Foristell, Mo., says it doesn’t take long to get your old set of tongs back to working shape.

Parallel Jaws A Must

When holding a horseshoe or work piece with your tongs, take a look at the position of the jaws. If the jaws are open at the tip and holding the shoe toward the reins, you won’t have a steady grip on the shoe. Take one swing with a hammer on the shoe and it may fly right out of your tongs.

On the flip side, if the tip of the tongs is holding the shoe tightly, but there is a gap in the jaws by the rivet, you won’t have control of the shoe. Swing the hammer again against the shoe and it slides through the tongs, once again making the tongs a useless piece of equipment.

Handling Your Hammer Doesn't Have To Be Hard

Cold Shoeing Doesn't Have To Hurt

Have A Horse That Objects To Nailing? Try Changing Your Technique