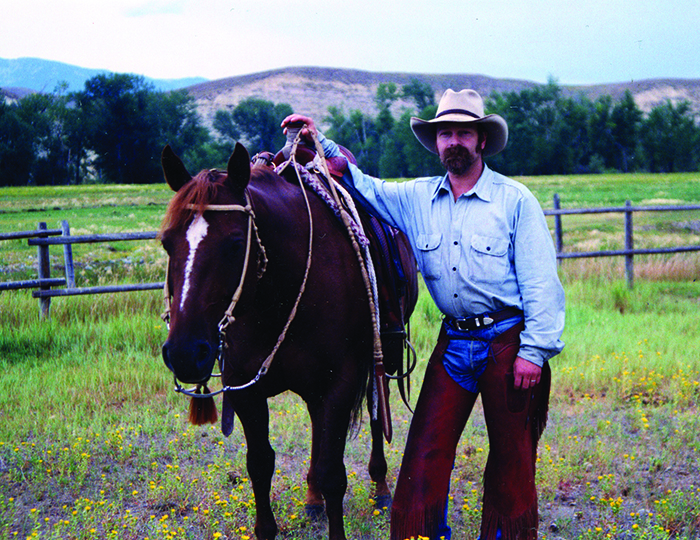 By Heather Smith Thomas posted on May 1, 2006 | Posted in Business Practices

ARTISTIC AND FUNCTIONAL. Jeff Minor with one of his horses. The horse is wearing a saddle and bridle made by Minor. While some of Minor’s work has been displayed at Western art shows, it is also functional gear that can be used by an actual rider or cowboy.

Jeff Minor enjoys making functional cowboy gear that is also beautiful. He started repairing tack at an early age — on ranches in Nebraska — and then began creating it.

“We repaired our own saddles, and our neighbors’ saddles,” he says. “I started doing braid work and every time I went to town I’d hang around the saddle shop, to learn more. I made my first 6-plait reins when I was 15. I used them awhile, then a guy wanted to buy them. So I sold those and made some more. That was the start of it all, realizing I could make something and sell it.”

In 1981, he apprenticed under a saddle maker in Colorado, where he’d gone to become a hunting guide. The outfitter he worked for had a lot of gear that needed repair, and sent Minor to the local saddle shop with it. They struck a deal in which the saddle maker taught him the craft in exchange for Minor doing tack repair.

He started working with rawhide in 1982, after he set up a saddle shop in Burns, Colo. After moving to Salmon, Idaho, in 1985, he set up a bigger workshop and started producing more saddles…