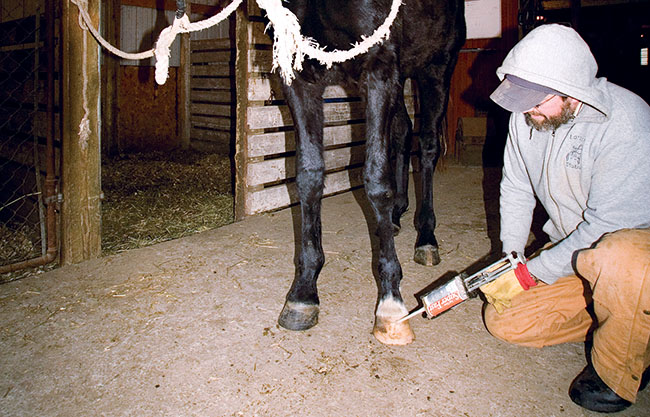 By Loretta Sorenson posted on January 1, 2010 | Posted in Therapeutic Shoeing

Along with Kwik Poly, Brian Larson uses Equi-Thane Super Fast for major hoof repairs since it’s easy to apply. Price considerations from horse owners often have a bearing on what particular products are used.

It wasn’t at all like Queen, a 2,000-pound Belgian draft horse, to hang around the barn door and refuse to go to out to the pasture. Her odd behavior was the first sign to owner Alan Sorensen (my husband) that his 5-year-old mare had foot problems.

“She was in so much pain that she wouldn’t even eat her grain,” says Sorensen, who works his draft teams on his acreage near Yankton, S.D. “I called the vet out and we found she had abscess in her hoof. We treated her and didn’t think too much of it. But after this happened three more times, the vet recommended that we take her to an equine clinic and X-ray her foot.”

When Sorensen consulted veterinarian Steven Tornberg at the Dakota Large Animal Clinic in Harrisburg, S.D., X-rays revealed a cracked coffin bone. While trauma and stress are major causes of this type of injury, Sorensen isn’t sure what caused the fracture.

Once Tornberg diagnosed the problem, he recommended that Sorensen contact Brian Larson. The Canton, S.D., farrier is well known for his ability to work with severe hoof problems.

“I had never seen a coffin bone fracture before,” Larson says. “I knew the most common way to help correct that kind of problem is with a…