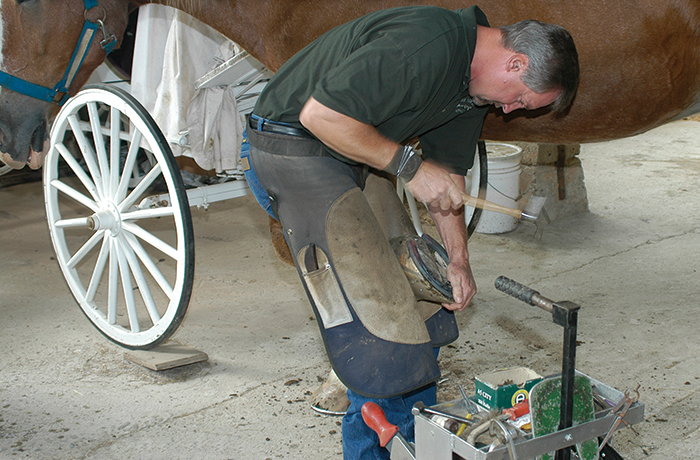 There's no shortage of choices in this tool, but what should the beginner look for?

WELL-USED TOOL. Very few farriers tools get more use than the driving hammer. Farriers tend to be very particular about these tools. Here, Jeff Pauley of Burnsville, N.C., nails a shoe onto a hoof.

Farriers are known to be particular about their tools — none more so that the driving hammer – which comes into play every time a shoe is nailed onto the hoof.

“It is really a matter of personal preference,” says Tom Riddle, general manager of Centaur Forge in Burlington, Wis. “One guy will swear by a hammer that another guy hates.”

In an informal American Farriers Journal survey taken in 2002, 53 percent of farriers said balance was the most important factor in selecting a driving hammer and 27 percent indicated it was how the hammer felt in the hand. Just 20 percent based their preference on how the hammer actually did its job of driving nails.

Given the wide range of farrier opinions on tools, it should come as no surprise that there are a lot of choices — an informal survey of farrier supply store Web sites indicates it’s not unusual for them to offer a score or more of choices from a wide range of tool makers.

How much you’ll have to pay for a driving hammer also varies widely. You can probably find an inexpensive driving hammer for as little as $20 to $25. At the other end of the scale are custom ordered driving hammers from top toolmakers…