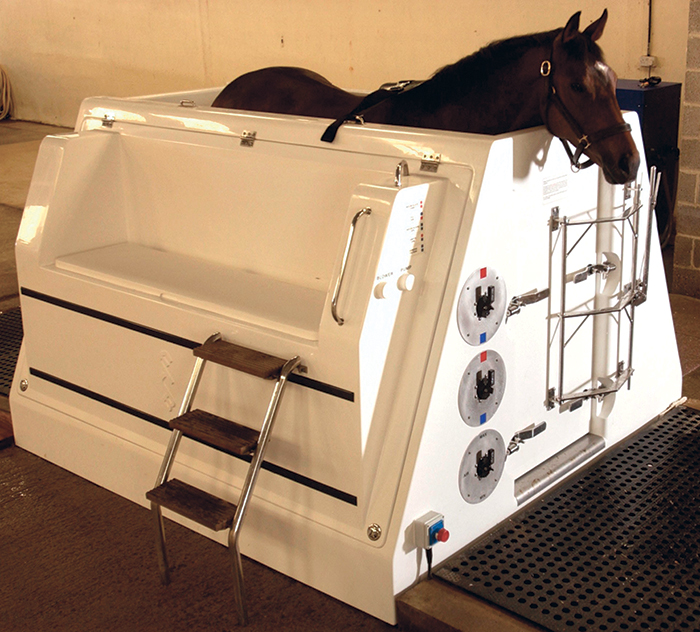 By Ron Perszewski posted on April 1, 2006 | Posted in Education, Equipment

More technically known as cold water hydrotherapy, the treatment hasn’t caught on in the United States yet, but it has elsewhere

SOME SWEAR BY IT. Although cold water hydrotherapy spas like the one shown here are widely used overseas, they remain virtually unknown in the United States.

Just in case one of your Web-surfing, world-traveling or horse show-attending clients raises the subject, let’s get up to speed on cold water hydrotherapy as an aid to equine hoof and leg health.

Cold water hydrotherapy uses chilled saline water applied by water jets to the lower legs as a horse stands in a chest-high, walk-in basin, often referred to as a spa. Advocates believe the therapy strengthens tissues and aids healing while reducing inflammation and pain.

The concept isn’t new. Advocates say sea water has been recognized for centuries as an aid to the treatment and prevention of leg problems in horses. They point out that for the past 150 years, various devices have been used to try to duplicate the benefits of cold sea water, and patent applications for devices to treat horses with water date back to 1873 in the U.S. and 1917 in the United Kingdom.

Today, three companies — based in England, Ireland and Australia — produce and sell the spas. Allen Gutowski, a Sparta, New Jersey-based representative for one of the manufacturers, ECB Equine Ltd. of England, knows of only two spas in the United States, both of them on private ranches in Texas.

ECB hopes to acquaint U.S. veterinarians with cold water hydrotherapy and has submitted a clinical study for review by the American…