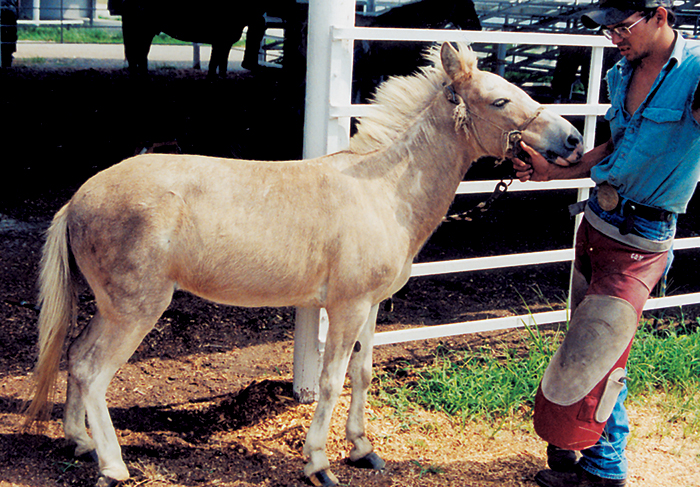 The “What’s This?” contest continues to draw attention on the American Farriers Journal Web site.

Chris Gregory of the Heartland Horseshoeing School in Lamar, Mo., sifted through a number of very good answers before selecting his winner. He judged those who had best identified the hoof problem, its causes and treatment options.

Read on to see what farriers had to say about these photos when they appeared online. Better yet, take your own shot at winning three free horseshoeing videos by entering the current round of “What’s This?” by visiting our Web site at  www.lesspub.com/htbin/whatsthis.pl.

“Once again, judging has been extremely difficult. Only one person guessed the type of animal correctly. It was a mule. This one suffered from a severed deep flexor tendon as a youngster and was left to his own devices to heal. He is not now owned by the people who owned him when he was injured.

“The damage to the deep flexor and subsequent changes to the coffin and pastern joints would render treatment at this stage impossible. I think this animal is around 6 years old, and was injured as a weanling. Remarkably, he takes his handicap in stride and is able to get around quite well.

“All the treatments suggested were good, although this animal is past most of them. Carrie Carpenter is the big winner, followed by Marilyn Blair and Paul Dorris Jr.

“Congratulations to everyone who answered. This is like every horseshoeing contest that ever was. The people that…

Premium content is for our Digital-only and Premium subscribers. A Print-only subscription doesn't qualify. Please purchase/upgrade a subscription with the Digital product to get access to all American Farriers Journal content and archives online.
KEYWORDS contest Diagnoses treatment videos What's This winner