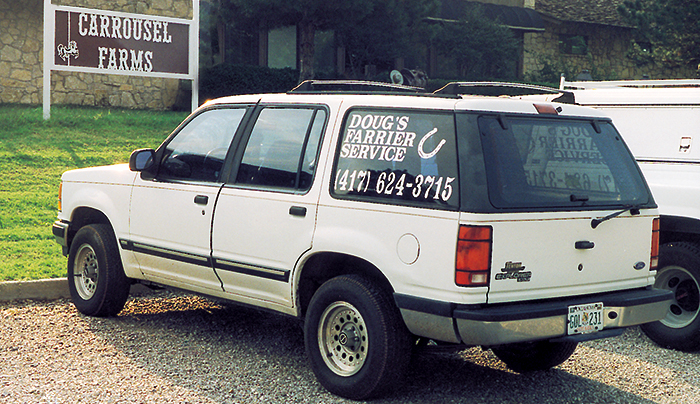 A Sportier Way To Shoe

An unusual rig gets farrier started in business

Stephens’ first rig was a 1990 Ford Explorer. Like many beginning farriers, this vehicle was what he owned at the time and was compatible for his shoeing business. Though this vehicle is rare for farriers, Stephens says it gave him lots of room for his supplies and tools.

Stephens recommends that any newcomer to the shoeing business use a sport utility vehicle (SUV) if they already own one. “You can get into a lot of places with it because it’s small and it’s good on gas mileage,” he says.

A drawback to using the SUV were the two rear, side passenger doors which limited access to the rear of the vehicle. A solution he suggests is to put hinges on the top of the side doors for easier accessibility.

Stephens promoted his business on the Explorer by having a local advertising business paint the rear windows with his company name and phone number. The cost came to $110.

Due to the limited response Stephens receieved, he says he wouldn’t recommend this form of advertising. Of his base of nearly 300 customers, the advertising only brought five new customers to his farrier business in 3 or 4 years. “They were good clients, but I thought I’d get a lot more leads from it,” he says.

Recently, the Stephens family expanded with the birth of…

There are Many Ways to Shoe a Cat