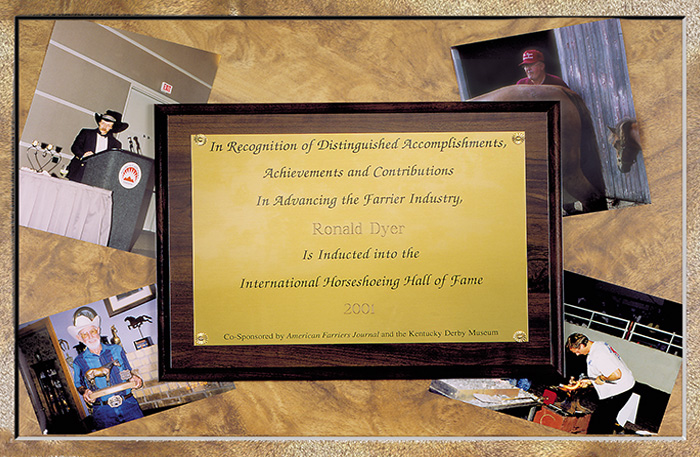 Four For the Hall

THE CLASS OF 2001. The new inductees into the International Horseshoeing Hall of Fame include (clockwise from top left) Roy Bloom, Ron Dyer, Billy Crothers and Henry C. “Arky” Pillsbury.

There was a time when those skilled in a trade or craft jealously guarded their knowledge, sharing their secrets with only a select few.

This year’s inductees into the International Horseshoeing Hall of Fame wouldn’t have fit well in such an era. If there’s a common thread running through the four men who make up the 2001 Class, it’s their willingness to share their knowledge of the craft with others.

The new inductees into the International Horseshoeing Hall of Fame are:

Nominations for the Hall are accepted from fellow farriers, trainers, owners, friends and family. A list of 43 candidates was submitted to all current members of the Hall, who served as the board of electors for the Class of 2001.

American Farriers Journal and the Kentucky Derby Museum jointly sponsor the International Horseshoeing Hall of Fame to honor farriers around the world who have made significant contributions to the profession and who have left a permanent, positive impression on their peers and their clients. This year’s four inductees bring total membership in the Hall to 75.

Premium content is for our Digital-only and Premium subscribers. A Print-only subscription doesn't qualify. Please purchase/upgrade a subscription with the Digital product to get access to all American Farriers Journal content and archives online.
KEYWORDS farrier industry Hall Of Fame IHHOF Nominees Shoeing Class

What's The Point Of The "Four Point?"