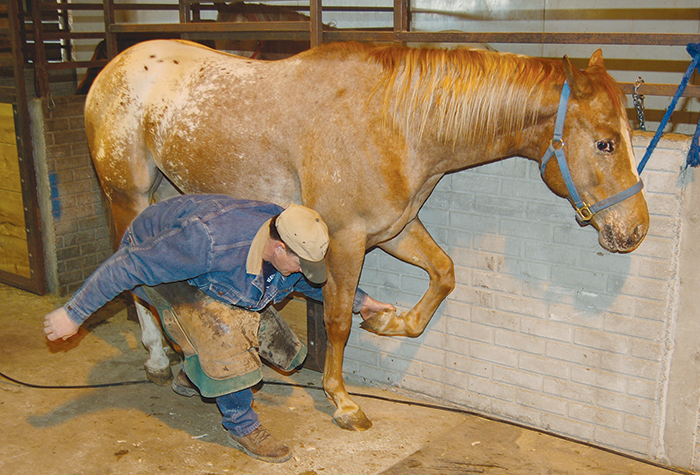 By Pat Tearney posted on May 1, 2006 | Posted in Disciplines & Breeds, Shoeing

Gregg Kremer lifts the opposite front foot on a horse, so he can be sure the other front is bearing weight as he checks his trim job.

A few years back, Gregg Kremer was right in the middle of an unfortunate continuing economic story — and he wasn’t enjoying it much.

The story is that of the embattled family farm. Uncertain prices for crops, rising costs and other financial difficulties led to tough times in the heartland, and an increasing number of farm failures and resulting sheriff’s sales. During the later 1980s, the farm crisis focused nationwide attention on Midwestern and Plains states like Kremer’s native Nebraska.

Singer John Mellencamp had a hit song called “Blood On the Scarecrow,” and the crisis also gave birth to the Farm Aid concerts, where Mellencamp joined other stars like Willie Nelson and Neil Young in raising funds to help farmers. But while the Farm Aid organization continues to try to aid agriculture, the nation’s attention has wandered elsewhere. That doesn’t mean, though, that everything is wonderful down on the farm. The continuing crisis helped give birth to Kremer’s career as a farrier.

“I was farming 500 acres and going broke,” Kremer recalled one recent morning as he headed out on the road in his shoeing rig. “I needed to get a job and I just hated the idea.”

It wasn’t work that Kremer was adverse to. He grew up working long. hard hours on the farm he was still trying to make a…