Onion Shoe: The Right Recipe For Many Problems

Victor Camp says the onion-heel shoe is “not a complicated shoe, but it can be a complex shoe.”

The farrier from Versailles, Ky., proved his point during the 21st annual Farriers’ Conference at Cornell University during November, covering a wide variety of problems he’s found the shoe useful for, as well as sharing forging and usage tips that he demonstrated with Kelly McGhee, a farrier from Loxahatchee, Fla.

Camp also cleared up some confusion by letting his audience know that the term “onion” doesn’t actually refer to the shape of the heels.

Camp told an audience of farriers and veterinarians that the term onion comes from France, where the shoes were first developed in the 17th century.

Camp, a certified farrier who had been extensively involved in therapeutic shoeing for the last 14 years, was introduced to onion-heeled shoe by the late French farrier Jean-Louis Brochet and Quebec farrier Luke LeRoux. He emphasizes that he does not believe any one shoe can be used for all horses or can solve any problem, but says he’s found the onion shoe and various adaptations of it useful in treating a variety of hoof and conformational problems. 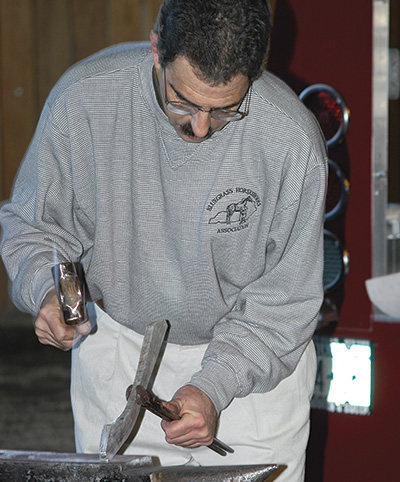 Think The Situation Through Before You Pick A Therapeutic Shoe

Matching the Shoe to the Job