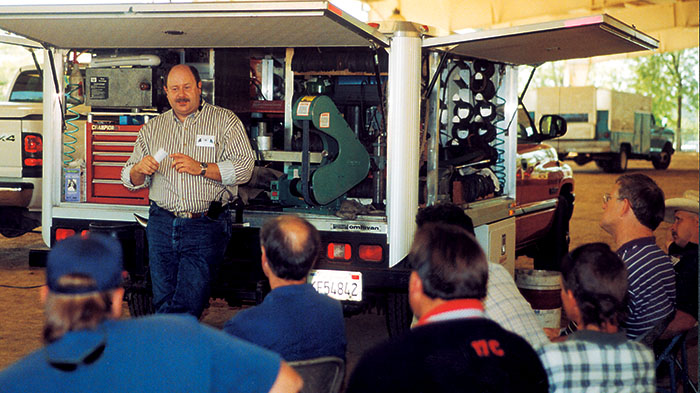 By Pat Tearney posted on November 1, 2001 | Posted in Business Practices

California shoer says thinking, acting professionally can pay off big for you

BUSINESS BASICS. Nigel Starkey, a California farrier, says applying sound business principles makes sense for farriers. As an example, he says shoeing rigs like the one behind him pay off in efficiency and offer an improved image for a farrier.

Nigel Starkey IS the first to admit he’s not all that experienced a farrier — but that doesn’t mean other farriers can’t learn from him.

“I don’t shoe to make a living but for the challenge,” the Rancho Palos Verdes, Calif., farrier told those in attendance at the Northern California Classic in Placerville, Calif. He quickly admitted he’d only graduated from Bob Smith’s Pacific Coast Horseshoeing School about 2 years before.

So why were far more experienced farriers willing to listen to what this newcomer had to say?

Because Starkey, a retired military man, has also started two non-horseshoeing companies, which have generated more than $3 million in sales. He says many of the same principles and strategies that made those businesses successful can work in horseshoeing.

Not An Individual, A Machine

Part of the key to doing that is to change how you think of yourself and your shoeing operation.

“I don’t think of myself as a one-man business, but as a corporation,” he says. “I’m not a personal entity, but a machine.”

Starkey knows that’s not the easiest thing for many farriers to do. But it does have its benefits — literally. Starkey says incorporating can mean savings and tax benefits in areas such as the cost of…

A Hoof Care Overview For The Novice