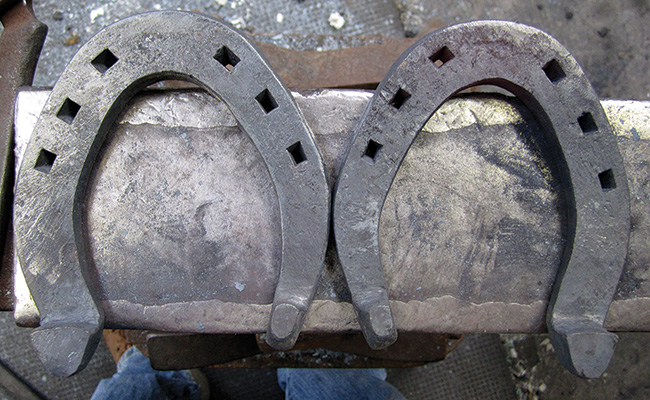 By Pat Tearney posted on January 1, 2011 | Posted in Forging

The 2011 Calgary Mail-In Exercise presents a double-barreled challenge to entrants. Farriers will be asked to forge not just one shoe, but two: A pair of roadsters, to be precise.

As usual, Chris Gregory, owner of the Heartland Horseshoeing School in Lamar, Mo., has helped us out by providing a “how-to” article on building the Mail-In shoe, that includes numerous photos to guide your efforts.

Gregory, a member of the International Horseshoeing Hall Of Fame, as well as a Fellow of the Worshipful Company of Farriers of Great Britain and an American Farriers Association Certified Journeyman Farrier, thinks the choice of shoes is a good one … or is that two?

“I was always told that there were two shoes that everyone should practice if they wanted to get good at shoe building,” says Gregory. “Those two shoes were a pair of roadsters.”

Gregory compliments Marshall Iles, the Calgary, Alberta, farrier who is chairman of the World Championship Blacksmiths’ Contest, for his selection.

“As Marshall said, there are a lot of farriers out there that can make one good roadster,” Gregory…

Calgary Mail-In Shoe Is A Challenge