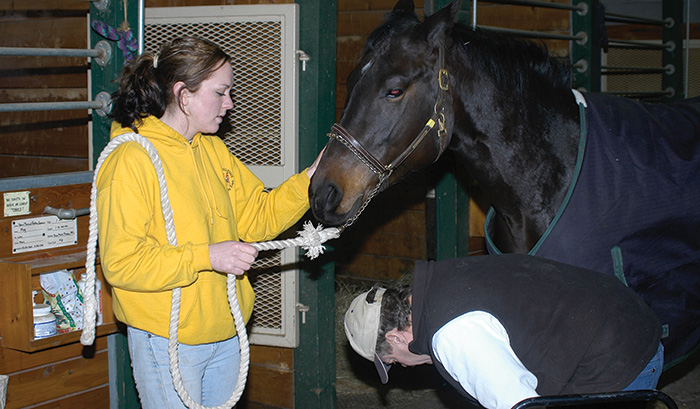 Everything I Ever Needed To Know About Working With Grooms...

HANDLER IN THE KNOW. Tracey Paegelow, who works at Willow Run Farm in Mequon, Wis., holds a horse as Mike Ehlert works on her feet. Ehlert says farriers can benefit from the knowledge barn staffers and grooms have from seeing horses every day. For example, just before Ehlert went to work on this horse, Paegelow warned him the horse “had been in a mood lately,” which led to the farrier taking extra precautions.

A few years back, there was a small book that was a big hit titled, “Everything I Ever Really Needed To Know, I Learned In Kindergarten.” Author Robert Fulghum expounded on  the importance of some of the basic rules for life that most of us learn at a very young age; rules such as, “Share everything. Play fair. Don’t hit people. Put things back where you found them. Clean up your own mess. Don’t take things that aren’t yours.”

Farrier Mike Ehlert may never have read the book, but he’s found that taking a similar approach when working with the grooms and staff of boarding barns makes his shoeing work go easier, faster and better.

“The folks who work in these barns don’t get enough credit for all the work they do,” says the farrier from Hartford, Wis. “I make a point of becoming friends with the barn help. When they’re my friends, they make my work more efficient.”

4 Tips to Build Up Your Team