By Pat Tearney posted on March 1, 2005 | Posted in Education

Building on the success of the first Summit in 2004, the 2005 event featured a higher number of attendees, more exhibitors at the trade show and — most importantly — even more opportunities for those in attendance to advance their hoof-care knowledge.

“Our biggest challenge was to come up with a program that would be even better than the first year’s,” said Frank Lessiter, editor and publisher of American Farriers Journal, the Summit’s host. “We took that challenge to speakers and found they were excited to have the chance to be a part of this unique, educational event. With their help and a lot of hard work on the part of our staff, we wound up with the kind of program people have already come to expect from the Summit.”

Dr. Richard Mansmann, the equine veterinarian from Chapel Hill, N.C., who was one of the Summit speakers, was impressed with the program.

“You have a great mix of farriers, vets, researchers and suppliers on this program that really works,” he said. “I’m amazed at how well you weave suppliers into the program and not make it look commercial. The Friday noon lunch session on adhesives that featured a half-dozen suppliers was excellent.”

Charles Hall, a two-time attendee, found the second Summit an improvement on the first. 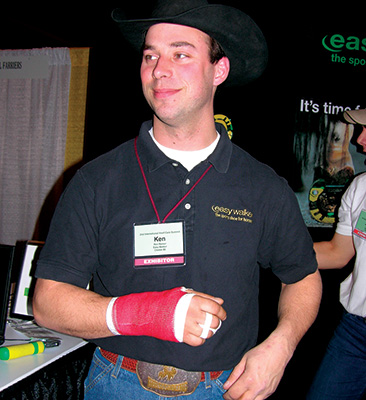