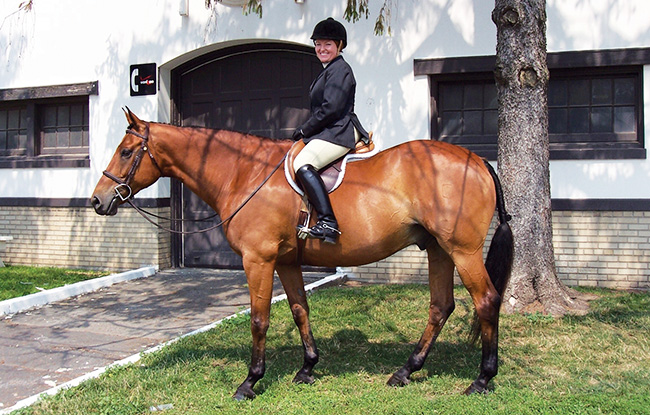 By Miranda Paton posted on January 1, 2011 | Posted in Diseases

Figure 1. Lobster at 14 years of age. He’s a 16.1-hand 1,300-pound, Dutch warmblood gelding that was shown in the hunter and equitation divisions.

In the summer of his 14th year, Lobster showed signs of arthritic changes in both front pastern joints. While his slightly long pasterns make him a candidate for this problem, “high ringbone” was not the anticipated diagnosis. After all, he had been carefully shod and managed his whole life.

It was not a diagnosis I wanted since advanced ringbone — osteoarthritis (OA) of the pastern joint — is painful and progressive. Some form of OA affects the vast majority of performance horses at some point. While OA is incurable, the clinical effects can be treated in an attempt to slow its progression.

Mike Wildenstein, CJF, FWCF (Hons.), the former resident farrier at Cornell University in Ithaca, N.Y., developed a corrective shoeing prescription that took Lobster’s conformation and age into account. Ideas offered by other members of the farrier, vet and the owner team led to new treatment options along with changes in the horse’s management and conditioning program that helped extend Lobster’s career.

In this case history, I’ll describe what I call “aggressive management” of OA in Lobster’s pastern joints. Shoeing and compromise are at the center of this story.