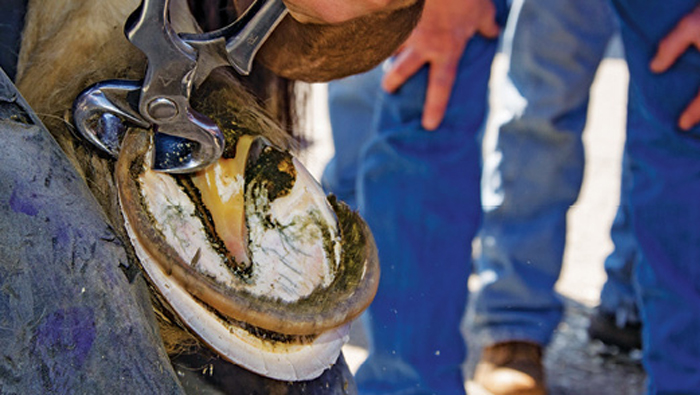 Buying, Using And Caring For Your Nippers

Reliable tips for selecting, using and maintaining one of your most important tools

When William Russell published “Scientific Horseshoeing” around the turn of the 20th century, there was nary a mention
of nippers.

The professor lamented the meager tool selection from which farriers had to choose.

“The simplicity and fewness of farrier’s tools have from the beginning marked the slow progress of his invaluable art,” Russell wrote. “The buttress, the knife, the clinch cutter, the hammer and the pinchers have comprised his ‘kit’ of tools.”

While Russell employed the buttress to remove excess hoof wall, some farriers were making use of hoof parers and similar tools. It’s unclear who or when hoof trimmers — a predecessor of nippers — were invented, but the tool was appearing in the pages of the “Official Gazette Of The United States Patent Office,” at least 40 years before Russell penned his book.

Avoid cutting the hoof wall too short at the quarters, which will cause the sole to flare.

When buying nippers, be aware of the size of your hands, the size of the feet you’ll be nipping and the amount of leverage you need.

A quality set of nippers should have a razor-thin amount of light between the blades when they are gently closed. When the handles are squeezed, the blades should eliminate the gap.

International Horseshoeing Hall Of Famer Lee Liles of the National Museum of Horse Shoeing Tools and Hall of Honor in Sulphur, Okla., found an 1860 patent that was awarded to Abraham Baker of Shenandoah…

Get More Bang For Your Buck When Buying Tools

Buying a Camera for your Work

Caring for Your Horse During a Pandemic