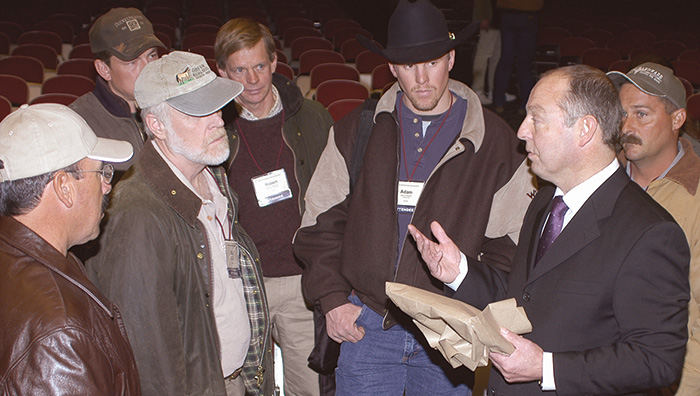 USEFUL TOOL. Farrier Simon Curtis, a member of the International Horseshoeing Hall Of Fame, talks with attendees at the 2005 International Hoof-Care Summit. Curtis says shoe extensions can be a useful tool in treating foals with deformities, but cautions that they need to be applied using sound principles and should be combined with other treatments

Legendary baseball player William “Wee Willie” Keeler, one of the game’s great place hitters, was known for the axiom, “Hit ’em where they ain’t.”

Simon Curtis from Newmarket, England, a member of the International Horseshoeing Hall Of Fame, may never have heard of the Baseball Hall Of Famer, but he paraphrased him during January’s International Hoof-Care Summit while discussing the use of shoe extensions in treating foals.

“When I was a young farrier, I was told you put extensions where the foot should be,” he told those in attendance. “You increase the ground surface.”

But Curtis believes that explanation is a little oversimplistic when it comes to treating foals. He says there’s more going on than that.

“I believe that extensions work because you move the foot in relation to the ground in the direction of the extension,” he says. A medial or lateral extension being used to help correct a medio-lateral limb deformity, for instance, helps ease excessive compression on the foal’s limb that is causing the problem.

“We’re not getting rid of compression,” he says. “We’re reducing it to an acceptable range for growth, so that the foal can fix…

Getting Started With Foal Extensions

Inside the Perimeter: Setting The Shoe Back

Hoof Gauges From All the Angles