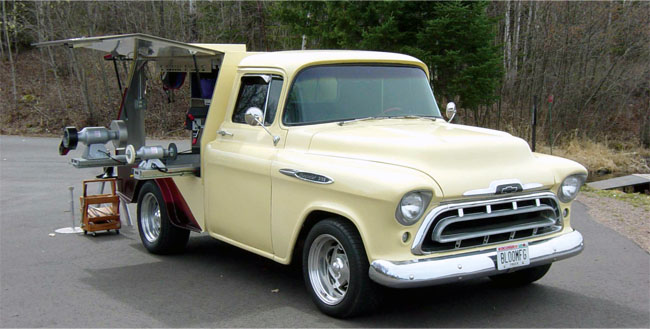 By Ron Perszewski posted on September 1, 2005 | Posted in Equipment

THE OLD WITH THE NEW. This 1957 Chevrolet truck features a 350-cubic-inch engine, a front end rebuilt from Impala parts and a rear end taken from a Camaro.

Onlookers might ignore even the most elite show horses if the classic beauties turned into shoeing rigs by Dan Burke and Roy Bloom happen to drive up.

In mid-2004, Burke and Bloom, who have been partners in a farrier equipment business since 1992, set out to find real eye-catchers, and they got them. They purchased a couple of well-maintained trucks from the late 1950s, customized them to bring out their best, and ended up with a couple of show-stoppers.

Burke, president of FPD (Farrier Products Distribution) in Shelbyville, Ky., found a ’58 Chevrolet 31 series Apache being sold through the eBay online auction by a seller in Weatherford, Texas.

“I already had a trip scheduled to the Dallas-Fort Worth area, so I decided to go by and see the truck. I could see that the owner had taken a lot of pride in his restoration, particularly the original features that he maintained,” Burke says.

Too Good To Pass Up

He didn’t buy the half-ton truck right away because he’d already bought a ’52 Dodge he intended to restore. However, he eventually changed his mind because the Chevy was in such good condition, and he set out to make it even better as a model shoeing rig and promotional vehicle for FPD.

The truck has an original 283-cubic-inch, V-8 engine with a four-speed…

Three Rigs, One System, No Missteps