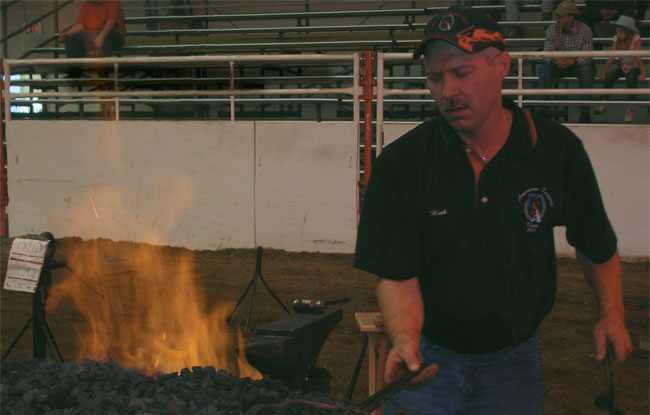 The world’s top shoers gather each year in Alberta, Canada, and this time it’s James Blurton standing alone at the top

After placing in the top 10 in each of his 15 previous attempts, James Blurton of Wales wears the crown as the world’s best blacksmith. He earned the title in his 16th try by topping the field in 4 days of competition at the annual World Championship Blacksmiths’ Competition held during the Calgary Stampede in
Alberta, Canada.

Blurton modestly accepted the title, along with a $10,000 check and other prizes, during the presentation ceremony at the July event. But afterward he admitted, “The title is everything. It feels pretty damn good, I’ll tell you!”

He had made a habit of placing among the top contenders, even earning the second-place title of Reserve World Champion in 1996 behind teammate Billy Crothers, a four-time World Champion.

That was when many AFJ readers first learned of Blurton through an article and photographs documenting his skills in crafting a three-quarter fullered front pleasure shoe with a toe clip and eight nail holes — in just 8 minutes. He built the shoe during the speed forging session of the competition.

Blurton remembers those who helped him reach the top, including Crothers.

“Billy has been my mentor over the years. He has a strong personality and more confidence. I’ve always felt, in the back of my mind, that I couldn’t beat him,” he says. “But last year, I had enough points in the final to win, but…