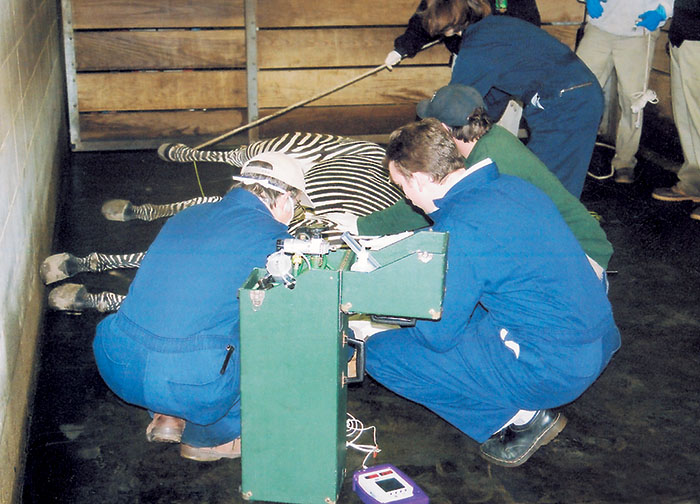 By Pat Tearney posted on September 1, 2003 | Posted in Disciplines & Breeds


ALREADY UNDER. The zebra has already been sedated by the time Joe Trhlik arrives to work on her. She is on an IV drip to keep her under during the treatment. While the zebra is sedated, zoo veterinarians will perform any other treatments the animal needs. Trhlik says three or four veterinarians will sometimes be working on the zebra at one time.

Racetrack farriers expect to deal with a certain number of temperamental animals. But Joe Trhlik has dealt with some that literally belong in a zoo.

Trhlik, of Oswego, Ill., earns the majority of his living as a track shoer at several Chicago-area tracks. But when a zebra at Chicago’s Lincoln Park Zoo damages a hoof by stepping on something, or wears down its hooves, Joe Trhlik makes a zoo call. He’s been treating some of the older mare zebras at the zoo for a number of years.

There is a regular routine to working with the animals. For one thing, while they may appear docile when seen in zoo surroundings, the zebras are far from domesticated. Farriers who are asked to work on them don’t walk into their stalls carrying a shoeing box and a hoof stand.

Instead, a zebra that needs attention is run into a catch stall and taken away from the other zebras. It’s then tranquilized with a dart. A zoo veterinarian starts the animal on an IV and it’s kept sedated for the entire time that it’s being worked on. 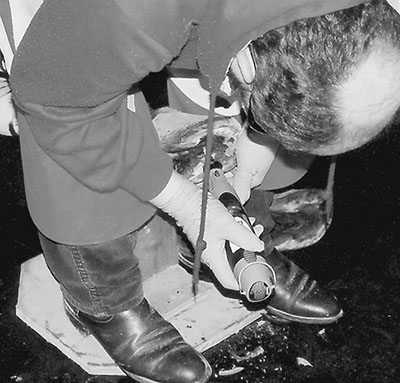 Shoeing is His Business, Polo Ponies His Passion

Competing Does More Than Fill His Trophy Case

Making His Mark as a Cutting Horse Shoer