A look at our most popular online blogs from the past year, with a fresh perspective

To mark the notable events of the past year, we wanted to capture some of the more memorable “From The Desk Of AFJ” blogs. So, we compiled brief summaries of 10 of the most read blogs (in descending order) that appeared online during the past 12 months. With the passing of time brings improved perspective. So, we’ve included insight and updates since the blog first arrived in your inbox.

You can access each blog in its entirety at americanfarriers.com. We’d like to hear your thoughts, too.

#10 End Of An Era At The Calgary Stampede

The Calgary Stampede shocked the farrier world in January when it announced it would end its 35-year relationship with the World Championship Blacksmiths’ Competition.

Despite the popularity of the forging tournament, top Stampede officials decided it was time to end the program.

The competition served a valuable purpose by allowing top farriers from around the world to compete against one another. Those who were part of the Calgary experience say it was an incredible opportunity.

Reboot: Four months after En­­glishman Steven Beane claimed his fifth world championship at Calgary, there still is a great deal of uncertainty. 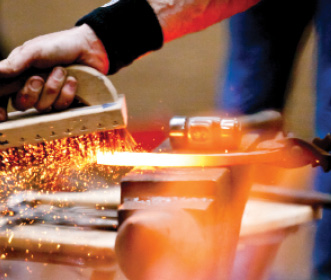 The Calgary Stampede ended its 35-year affiliation with the World Championship Blacksmiths’ Competition in July.

“There will still be a blacksmith committee and there still will be demonstrations, but there will be no contest,” says Marshall Iles, a…