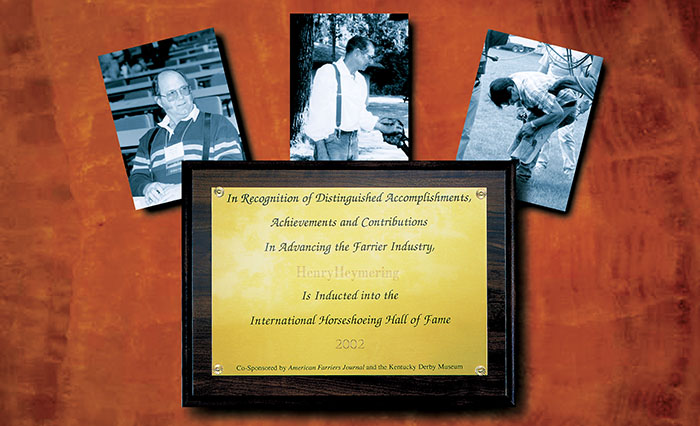 By Michael Austin posted on December 1, 2001 | Posted in Business Practices

THE CLASS OF 2002. Joining the elite ranks of the International Horseshoeing Hall of Fame this year are (left to right) Henry Heymering, Lester Hollenback and Seamus Brady.

The horseshoeing business certainly owes a tremendous amount of gratitude to this year’s three inductees into the International Horseshoeing Hall of Fame.

While it’s noble enough just to be in a profession doing back-breaking work for an entire lifetime, it’ s certainly another thing to advance the business for future generations. This year’s inductees into the Hall of Fame, Seamus Brady of Bridgewater, N.J.,

Henry Heymering of Frederick, Md., and Lester Hollenback of Deltona, Fla., all have helped move the practice of horseshoeing into the 21st century.

Once nominations were in, the list was trimmed to 54 candidates, who were then voted on by the current members of the Hall of Fame. Sponsored jointly by American Farriers Journal and the Kentucky Derby Museum, the International Horseshoeing Hall of Fame now has 78 members.

Having been in the business for more than 40 years, it is thought that…