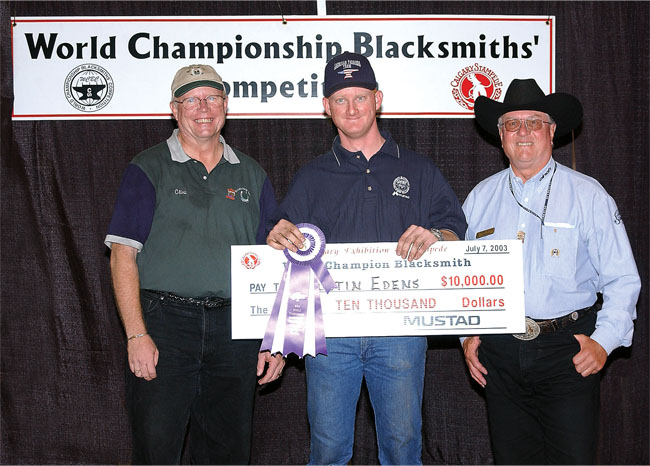 By Ron Perszewski posted on September 1, 2003 | Posted in Business Practices

After years of top 10 finishes, a Texas farrier completes his climb to the top with a narrow win over his friend and practice partner

THE BIG MONEY. The World Champion Blacksmith, 24-year-old Austin Edens of Graham, Texas, holds a check for $10,000 after his victory. Edens is flanked by Clint Carlson (left), of St. Croix Forge, and Fred Allen, director of the Calgary Stampede Blacksmith Committee.

Austin Edens, a 24-year-old from Graham, Texas, has been steadily climbing toward the top spot for a few years and finally reached the summit — the title of World Champion Blacksmith at the annual Calgary Stampede. With his title, he earned a hefty $10,000 check and plenty of other prizes that go with it.

“I love it — it’s a dream come true. It’s something I’ve been working toward for a long time,” Edens said after his win.

Edens bettered friend and U.S. teammate Mark Milster (the 2001 World Champion) of Dibble, Okla., by half a point in the final. “Mark and I practice together all the time. Mark Milster showed me everything. He’s really helped me out in this,” Edens says.

Edens has been competing for 6 years. His past World performances included Top Ten finishes each year, including third place in 2001 and Reserve World Champion in 2002. He regularly shoes jumpers, dressage and cutting horses.

Though Edens earned veteran status through his 6-year march to the top, World Championship Blacksmiths’ Competition committee chairman Marshal Iles notes that new faces emerged in the top 10 during this year’s show, held July 3 to 7 in Calgary, Alberta, Canada. “It’s a phenomenally hard…