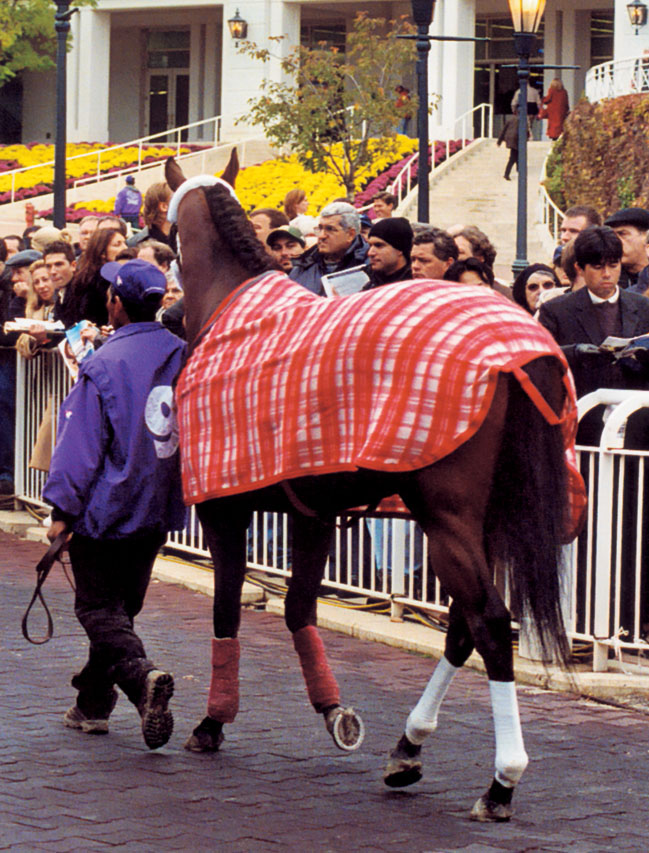 By Frank Lessiter posted on September 1, 2003 | Posted in Shoeing

As a small portion of his track shoeing business, this Breeders’ Cup farrier often handles one-time work on foreign stakes horses who he’s never seen before

When it comes to shoeing horses just prior to high-stakes races, Bill Scalzitti is often forced to work on horses who he’s never seen before. Along with his year-round track work, the Des Plaines, Ill., shoer does some last-minute shoeing work and checkups on foreign-based horses flown in for big-dollar stakes races at Chicago-area tracks.

Billed as the world’s most lucrative and prestigious racing program, the late October Breeders’ Cup climaxed the 2002 international racing season. From its 1984 start at Hollywood Park in Inglewood, Calif., the Breeders’ Cup has grown into a world-class event with more than $115 million wagered last fall both on site and via simulcasts throughout the world.

Besides having shod horses at Chicago-area tracks since 1984, Scalzitti shoes during the winter at the Fairgrounds Race Track in New Orleans, La. He also spends 3 days each month at the Laurel Race Track in Laurel, Md., to shoe for Grover G. “Bud” Delp, who trained a number of champions that included Spectacular Bid. This recently deceased horse won 26 of 30 starts and retired as racing’s all-time North American leading earnings winner back in the 1980s. He still holds the American dirt record over 1 1/4 miles, having run the…

Tips for Everyday Shoeing from One of the Legends: Bruce Daniels

Time To Slow Down After Trimming And Shoeing 15,000 Mounted Police Horses