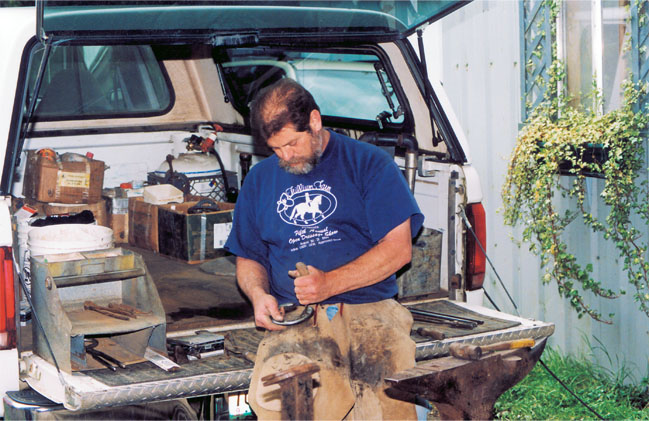 By Lynda Layne posted on September 1, 2003 | Posted in Shoeing, Trimming

REAR TO FRONT SEQUENCE. Changing the shoeing order on some difficult horses can keep a farrier safe. Stevens starts on the right rear foot with a mare who customarily blows up long before all four feet are finished. He would rather be at the front end when this mare loses her patience.

Like many farriers, Larry Stevens spent years trimming and shoeing in the same sequence. He preferred starting with the left front foot, then the right front. Then, he repeated the order with the hind feet. He’s left-handed and thinks this might have been the subconscious reason for this preference.

But after working with some problem horses and with youngsters who hadn’t had their feet handled much, he learned that changing the order was often the key to his safety, and also in making the horse more manageable from that point on.

A prime example of this interesting theory is packaged in a 9-year-old half-Thoroughbred mare named Scarlett, who belongs to a client that Stevens has had since 1986. The client has two other horses who are a cinch to shoe. But this particular mare is nervous, short-tempered and often combative.

To add to the woes, she requires a lot of work because of the need for special pads in front and a problem with one hind foot. Because she once kicked a stall wall and fractured her left rear coffin bone, she wears an egg bar with side clips and a rim pad. Stevens averages about an hour…

Trimming Minis Is No Small Deal

A Safe Approach to Shoeing Stallions