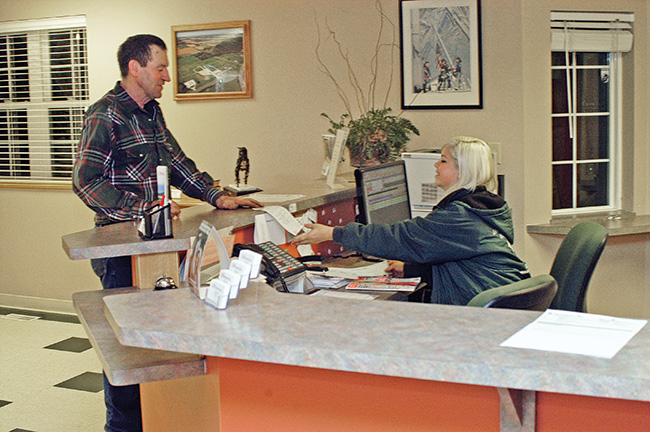 By Jeremy McGovern posted on January 1, 2011 | Posted in Therapeutic Shoeing

Dean Johanningmeier has two passions in footcare: therapeutic work and passing on what he has learned

Johanningmeier drops off his last bill of the day. The clinic will directly pay him next week and administer the billing to the client.

With below-freezing temperatures and a steady snowfall on this early December morning, winter reminds south-central Wisconsin residents where they live. It is the type of weather that makes a farrier happy to be working indoors. For Dean Johanningmeier’s “Shoeing For A Living” day, he has those cozy accommodations — for the most part.

The farrier for the University of Wisconsin-Madison School of Veterinary Medicine is spending the day at the school’s Morrie Waud Equine Center in Delavan, Wis. While Johanningmeier and the horses he works with today will enjoy the warm clinic, he’ll occasionally venture outside should he need supplies or use any of the power tools in his trailer.

The clinic, which provides emergency and therapeutic services for horses in Wisconsin and northern Illinois, is Johanningmeier’s home every Wednesday and one Monday each month. On Thursdays, he works out of the university’s Veterinary Medical Teaching Hospital at the Madison campus. He also shoes at various barns throughout southern Wisconsin on the other weekdays.

The horses he sees at the clinic range from those in need of therapeutic solutions to those that are sound, but whose owners return because they liked how their horse responded to Johanningmeier’s work.

It has been a long journey to develop that kind of loyalty. Growing up in Iowa, Johanningmeier trimmed his first horse at 13 and, 3 years later, shod…

Setting a Standard in West Texas