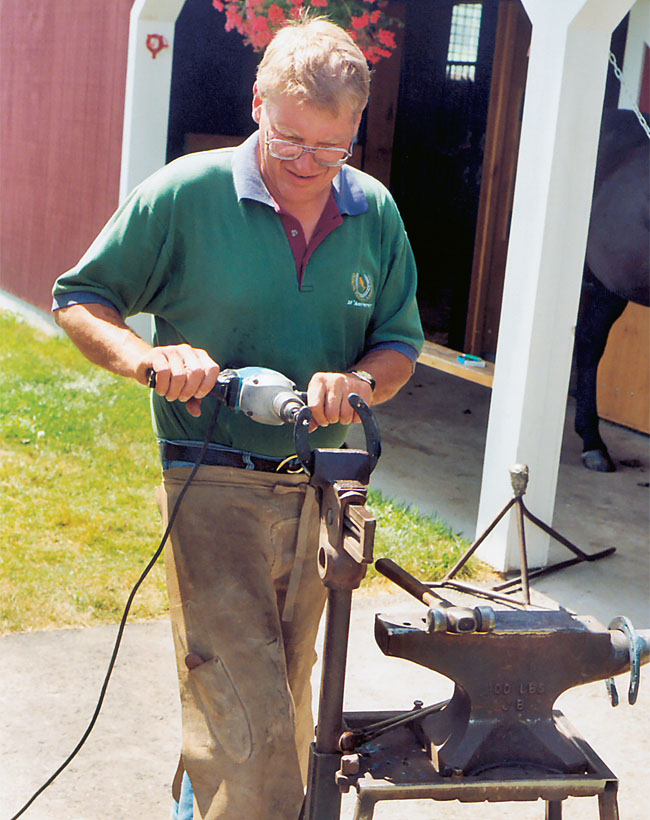 ON TAP. Canadian farrier Hans Wiza taps a stud hole in a shoe so that it can be fitted with a screw-in calk.

After a quick stop for “double-doubles” — coffee with two sugars and two creams in the “States” — Hans Wiza and his crew of two other horseshoers are ready to embark on a day’s shoeing near Guelph, west of Toronto in Ontario.

9 a.m. As he pilots his truck across the Ontario countryside, the 50-year-old Wiza discusses his background. His father, Walter, who had emigrated to Canada from Germany after World War II, was also a farrier.

“The smell of hoof smoke came to my dinner table every day of my life,” he recalls.

When he only 4 or 5, Wiza was already riding along with his father. As he grew older, he began helping his father more and more. Eventually, his father arranged for him to return to what was then West Germany, where he apprenticed and went to horseshoeing school at the Veterinary College in Hanover.

“They do things differently there,” Wiza explains. “You do an apprenticeship where you help an experienced farrier before you go to school. That way, you have some background and experience to draw on.”

A Shoeing Team for a Riding Team