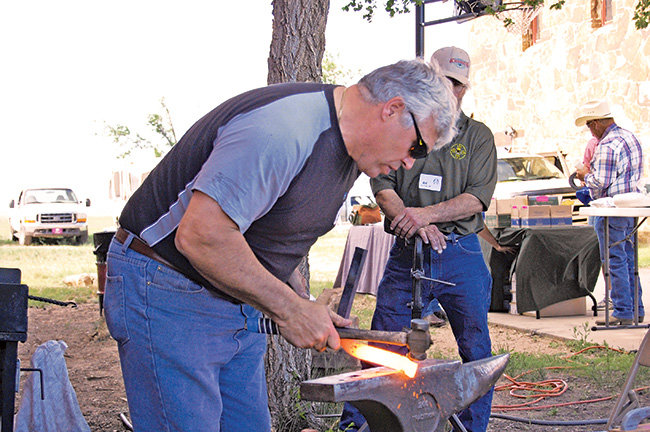 By John Bradshaw posted on December 1, 2010 | Posted in Shoeing

Grant Moon doing a little pre-clinic forging just for the fun of it.

Grant Moon sees horseshoeing, in part, as a program of preventative maintenance. He told about 75 horseshoers at a clinic at Wagon Mound Ranch Supply in Solano, N.M., that a big part of their job is preventing injuries while maximizing performance.

Moon offered his opinion on several facets of shoeing during the clinic and made it clear up front that everything he discussed would be opinion.

“It’s an opinion. It’s Grant’s opinion, not Mustad’s opinion,” Moon said. (Moon is a consultant for Mustad International.) A resident of England now, Moon grew up in Wales and has given clinics in 36 countries. Despite all that travel, the remote location of Wagon Mound Ranch Supply was deserving of notice. “I just realized you don’t get to shoe a horse unless you go 50 miles from home in this part of the world,” Moon said.

The clinic, titled “Practical Tips for Everyday Shoeing,” was broken into two portions: a classroom lecture and a shoeing demonstration. Moon said he wants to be a motivated farrier and doesn’t think it is ever too late for a horseshoer to become motivated and learn more.

“I don’t think I’ll ever be a master, because I keep learning how much stuff I don’t know, and how much I’d like to know,” he admits.

Moon looks at a shoeing business as a pyramid. Sound horses should be at the bottom of the pyramid…

Delivering As An All-Around Farrier

Hoof-Care Highlights: The Week of January 9