Quality keg shoes can make a farrier’s life a lot easier. They’re well made, competitively priced and available in a broad range of sizes and shapes to fit the hooves of just about any horse. With a little help, of course.

The ability to modify keg shoes to meet the needs of a particular horse has become a key skill for the professional farrier to master. In coming issues, American Farriers Journal will feature a series of articles on modifying keg shoes.

This series opens with advice from Danny Ward of Martinsville, Va., an American Farrier’s Association (AFA) Certified Journeyman Farrier and a member of the International Horseshoeing Hall Of Fame. Ward describes how he cold-shapes a front pattern keg shoe when the shoe doesn’t quite fit the foot. 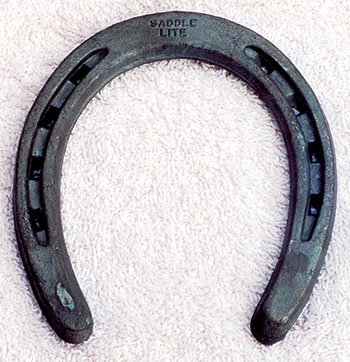 DON’T OVERDO IT. Danny Ward says there is a tendency to overwork keg shoes when modifying them. He said this front shoe would need only minor changes to conform with most individual hooves.

Ward warns against overworking keg shoes, which he says will usually be “pretty close” to properly fitting most horses.

“We’ve got the hammer, we’ve got the anvil and we’ve got to hit ’em,” says Ward, describing what he believes is a common trait of many farriers. “I’ll find some shoes fit pretty good, but I’ve got to go hit ’em anyway, because I’ve got all the tools.”

There are problems with that, he says.

“Once you’ve overworked a shoe, than it’s three…

Premium content is for our Digital-only and Premium subscribers. A Print-only subscription doesn't qualify. Please purchase/upgrade a subscription with the Digital product to get access to all American Farriers Journal content and archives online.
KEYWORDS Forging keg shoe modifying keg shoes