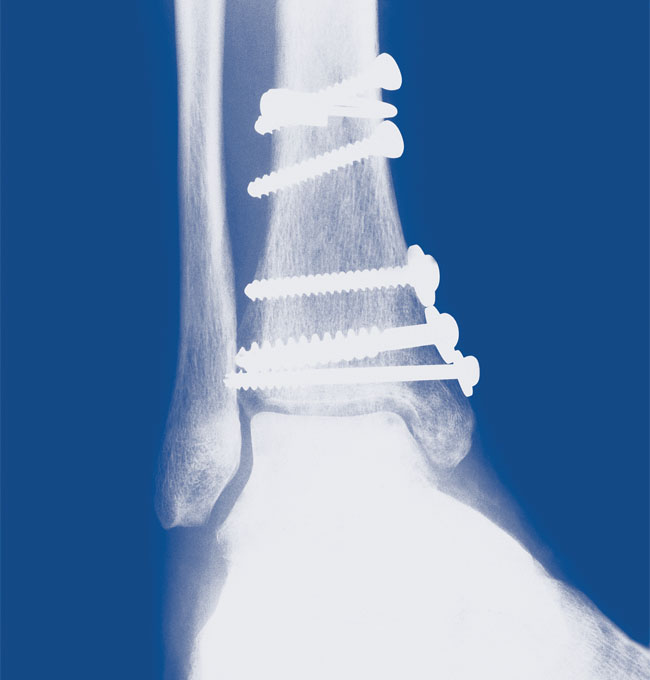 Getting By in the Face of Ruin

By Ron Perszewski posted on November 1, 2003 | Posted in Safety & Healthcare

It can happen to you. Serious illness or injury can bring financial disaster that rips apart a lifetime of shoeing work. An appropriate insurance package can be the safety net that keeps you from hitting absolute bottom.

AN INSIDE LOOK. The screws and wire wrapping shown in this X-ray held Mike Ehlert’s bones together while his leg healed. The hardware remains in the leg.

It was just 2 inches. Stepping onto the boat landing, the heel of Mike Ehlert’s left foot slipped just 2 inches, focusing all of his body weight on the twisting leg. The torque shattered both bones in the lower part of the limb as his foot turned to a gruesome angle. Moments later he lay on the landing, heading into shock.

It happened at 5:01 a.m. Saturday, May 18, 2002. Ehlert, a farrier, remembers the exact time — and will never forget it — because he had just looked at his watch after helping launch the fishing boat belonging to his friend, Bill. It was their 12th annual fishing trip, but they never made it onto the water. Instead, Ehlert was rushed to a hospital in nearby Escanaba, Mich., transferred to a hospital closer to his home in Hartford, Wis., 30 miles outside Milwaukee, and underwent major surgery that evening.

The tibia, the larger of the two bones, suffered a long, vertical crack running down into the ankle. The fibula was broken not far below the knee. Doctors inserted five pins and screws, plus a wire wrapping, to piece the bones back together. The meter was running, well on its way to $22,000 in medical bills. Ehlert wouldn’t work again for 6 months, and only part time for 2 months after that.

Keep Your Forge Efficient By Replacing The Liner