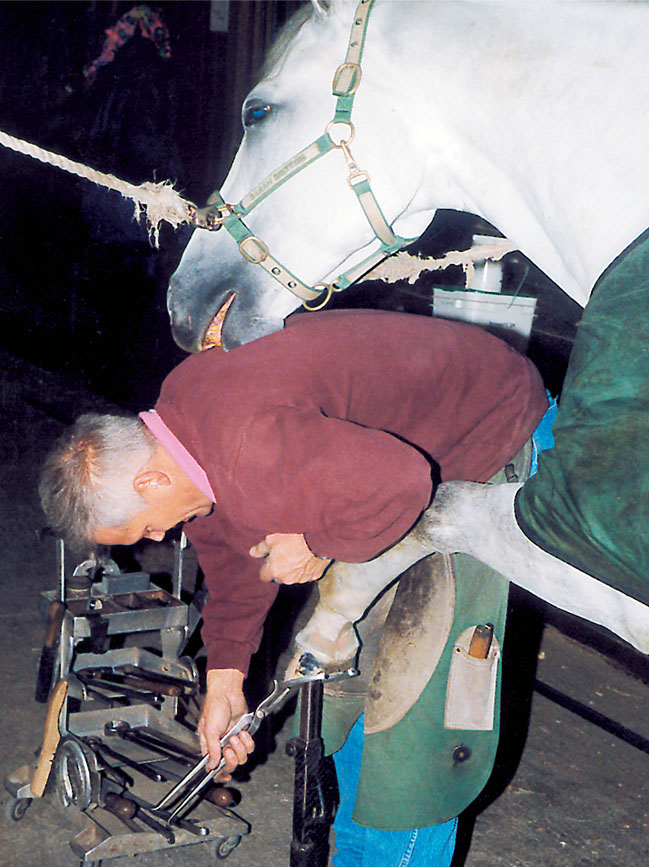 Be a Farrier, Not a Carrier

By Pat Tearney posted on November 1, 2003 | Posted in Safety & Healthcare

CONTAMINATION POSSIBILITY. The habit some horses have of rubbing their noses against or chew ing on a farrier’s shirt — as this healthy horse does with Findlay, Ohio, farrier Bobby Menker — is usually no more than a minor annoyance. But it could be more than that if the horse is sick. The shirt could be contaminated, and the illness passed to another horse that nuzzles the farrier’s shirt later in the day. Experts say if you know a horse is ill, it’s a good idea to wear coveralls and change them before you go on to shoe another horse.

Typhoid Mary was the nickname the press gave to an early 20th century cook who was tied to 10 typhoid outbreaks in affluent New York City area households. Through unsanitary personal habits and ignorance, she served as a “carrier” for the bacteria that caused the often-fatal disease, without becoming ill herself.

No farrier wants to become known as Strangles Sully or Rotavirus Rick. So it’s important to take steps to ensure that you’re not carrying equine illnesses from barn to barn — particularly if there is a known outbreak of any equine malady in your area.

Roberta M. Dwyer, a veterinarian and graduate of the American College of Veterinary Preventative Medicine at the University of Kentucky’s Gluck Equine Research Center, suggests that farriers make a point of asking barn owners if there are any sick horses in a barn where they are about to work. At the same time, she…

Hands-On Clinic Continues To Be A Crowd Favorite

Proper Equine Diet Can Be a Difficult Balancing Act

A Shoe Fit for a Farrier