By Pat Tearney posted on January 1, 2002 | Posted in Forging

When adding trailers, make sure you don't lose sight of the rest of the keg shoe

Putting trailers on your keg shoes isn’t a particularly daunting task according to Danny Ward — at least as long as you keep the big picture in mind.

The American Farrier’s Association (AFA) Certified Journeyman Farrier from Martinsville, Va., says the biggest mistake farriers make when adding trailers to shoes is paying too much attention to the trailer and not enough to the foot.

“What I find is that people get their trailer pretty good, but they lose their fit right behind the trailer,” he says, pointing to that area on the branch of a shoe. “I’ve always said after you make the trailer, be sure to shape the shoe back into where the trailer starts.”

To add a trailer, fit the shoe so that a small amount of metal hangs out past the buttress of the heel. After heating the heel you’re going to put the trailer on, place the outside edge and heel of the shoe on the face of the anvil and strike the end of the heel at an angle. Drop your tong hand while hammering until the heel is turned out to where you want it. 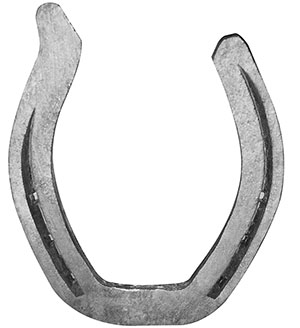 ADDED SUPPORT. Trailers, like the one on this handmade shoe, provide added lateral support. They’re most frequently used on the outside-hind foot of cow-hocked horses. 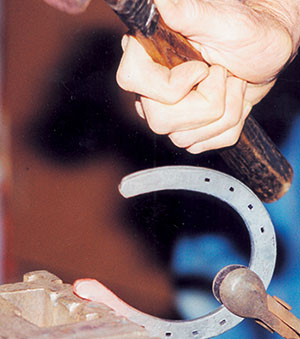 HEEL STRIKE. Trailers are made by striking the outside heel of the shoe while dropping the tong hand until the proper angle is achieved.