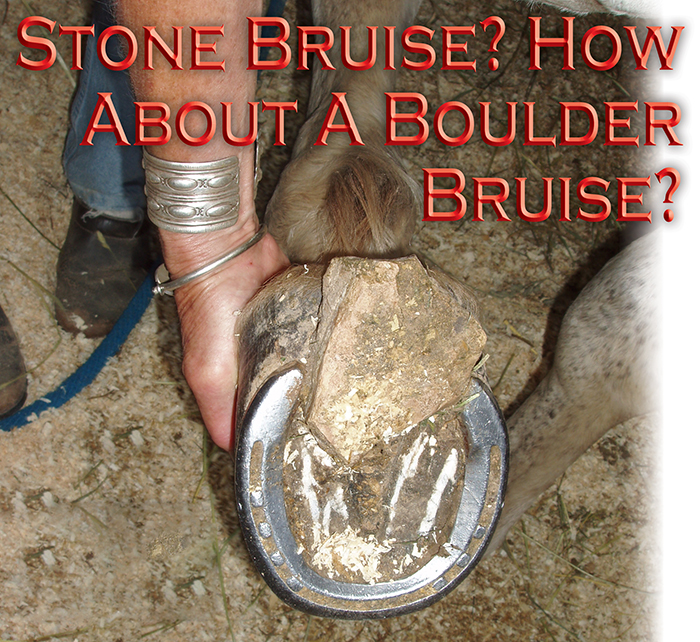 Stone Bruise? How About A Boulder Bruise?

By Pat Tearney posted on July 1, 2006 | Posted in Lamenesses

Illinois Farrier chips away at a lameness issue

There are rocks — and then there are ROCKS. Above is a picture of one of the latter.

When Art Miner, of Davis Creek Farrier Service in Davis Creek, Ill., was called out to Six Springs Farm in nearby Elizabeth, Ill, he found one of the most unusual cases of a rock stuck in a horse’s hoof that you’ll ever see.

Dexter, the horse, had apparently stepped down on the rock at just the right angle for it to become wedged between the heels of his shoe.

“This rock was about 1 1/2 inches thick and stuck down below the base of the shoe,” says Miner, recalling the problem. “Dexter was fairly lame over it, as you can imagine, and the rock was wedged in so tightly that several attempts by the barn owner and stable help failed to dislodge it.”

Of course anytime Dexter put any weight on the rock, it had the effect of wedging it into the heels even more tightly. When Miner arrived, he found this particular hoof-care problem was more in need of a pickaxe or sledge hammer than a rounding or driving hammer.

“The rock finally came loose after we’d chipped several pieces of it away,” Miner recalls.

Dexter was happier immediately and no permanent damage was done to the horse.

“Sometimes seemingly simple cases like this can be aggravating,” says Miner. “But at least this one worked out well.”

Indiana Farriers Association Dedicates A Stone Bench In Memory Of Member And Past President, Tim Byrne