By Jeremy McGovern posted on March 1, 2011 | Posted in Education

The International Horseshoeing Hall Of Fame was started in 1993. This year’s seven new members have all left their mark on the shoeing industry through hard work, dedication and a passion for equine footcare. A common thread in their careers is their willingness to share knowledge and help others in the industry improve the overall state of hoof care and soundness. Current members of the Hall served as the slate of electors for this year’s nominees.

Hailing from Carluke, Scotland, Sandy Beveridge has had a tremendous impact on farriery. Although he may not be as well known by American shoers, one of the people who nominated him wrote, “it is only because of his humble nature.” 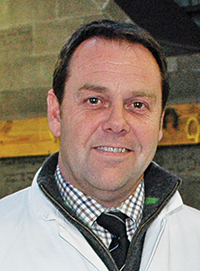 His farriery career began in 1980, when he began apprenticing with two other Scottish members of the Hall Of Fame, Jim and Alan Ferrie. Beveridge earned his diploma in the Worshipful Company of Farriers (WCF) in 1984, followed by his Associateship in 1988. The following year, he became one of the youngest to achieve a Fellowship…